This post contains some affiliate links. This means that if you decide to click on the link and make a purchase, I might receive a small commission that helps me keep the blog going. The price you pay stays the same. Thank you for your support.

You've heard of the Nutri Ninja blender, right? It's a 1,000 watt (read: quite powerful) motor that, with really sharp blades, literally pulverises anything you put in it. The information on the box even says that it powers through ice.

I was contacted by the people at Nutri Ninja to see if I'd like to try the Nutri Ninja with Auto IQ and let you all know what I think of it. Oh, and I made you a really gorgeous ice pop recipe, too. Because I'm good like that. 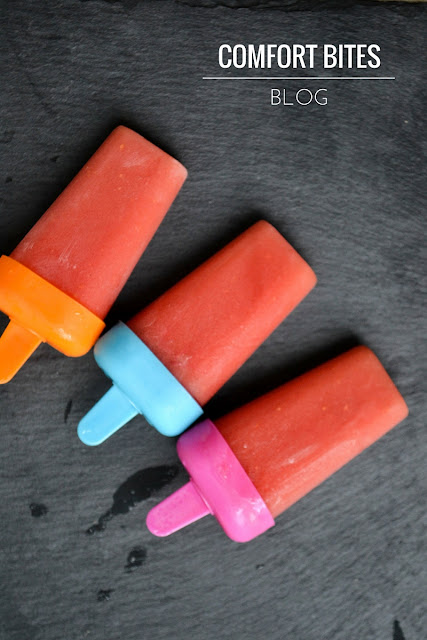 As a proud owner of a Nutribullet, I wondered whether the Nutri Ninja (which, up until now I'd heard less about, to be honest) could out perform its smoothie-making rival. The Ninja has more power - a buzzier 1,000 watts, against the Bullet's tamer 600 watts. But, despite having to shut a few more internal doors before I make the morning smoothies, there were two clinchers that made me sweep the Nutri Bullet off my kitchen worktop and put the Ninja in its place.

And I didn't think that I would.

The first is that the Nutri Ninja is more versatile. Unlike the Nutribullet, the leaflet inside the box proudly states that you can use it to crush ice. It's not just for smoothies. And it doesn't need a minimum amount of water like the Nutri Bullet does, meaning that you can use it to make natural fruit (frozen banana) ice creams, dips and sauces as well as the usual smoothies. You can't put hot liquids in either of them, though. This is just for cold - or at the very least, room temperature stuff.

The other great thing going for the Nutri Ninja is the Auto IQ function. You just fill up your ingredients into the blending jug provided (you get two of them - one large, one medium; both with lids), screw on the blade and push down and twist it onto the motor. Then, instead of pulsing or blending and standing next to it, wondering if you're going to get lumps of frozen banana in your smoothie at the end (surely that doesn't always only happen to me?) you just push a button and it works it all out itself. It blends on high speed, pulses for a bit, blends again and goes through a programme meaning that you get a beautifully smooth liquid at the end. All that pulsing and pausing allows the ingredients to sink back down towards the blades, for a more thorough blending. And then, for tougher or thicker recipes, you have an 'Ultra Blend' function, where it tries even harder.

Fair warning - I found that the Nutri Ninja doesn't break down all seeds - I do end up with some tiny seedy bits in my raspberry smoothies. However, I've always previously used a stick blender and so I'm kind of used to it. It's all fibre, anyway.

We tried a few smoothie recipes - strawberries, peanut butter, spinach, mango, papaya... they all came out rich and velvety smooth. But, for a change, and also because it was the hottest week of the year so far, I decided to make some ice pops using raspberries, mango and green tea. You can also see me making them in my latest You Tube video.

I hope you love them as much as do! 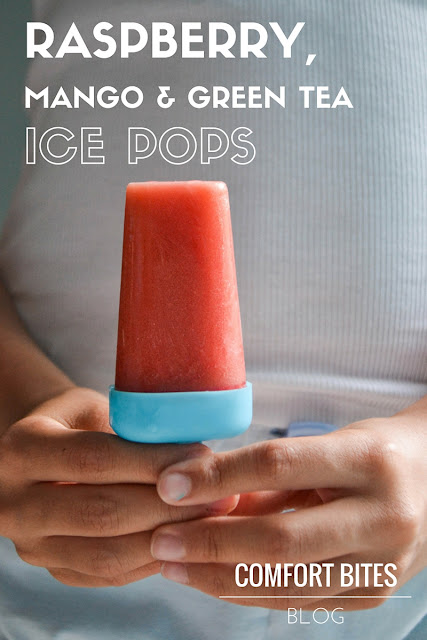 Method
Pour the cold green tea into the blender jug and then add the mango and raspberries. Trickle in the maple syrup, if using, and then screw on the lid with the blade. Blend (the regular 'Blend' function on the Nutri Ninja does the job here) until smooth, or until the programme stops, after around 45 seconds. Carefully take off the jug, turn it upright and then unscrew the base with the blade (careful, the blades are really sharp!).

Pour the liquid into lolly/ice pop moulds and pop on the tops/sticks. Freeze for 2-3 hours or until solid and then rinse the bases under the warm tap quickly to loosen them from their moulds. Serve straight away.

Disclosure: I received the Nutri Ninja for the purposes of this review, however all opinions are fully my own.

Have you seen the new Freezer Cooking for the Paleo AIP ebook? Check it out for more time and money saving recipes... 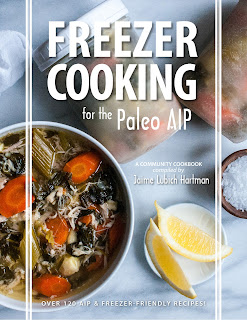 I've linked this up to Phoenix Helix's Recipe Roundtable - check it out for more AIP inspiration.