This post contains some affiliate links. This means that if you decide to click on them and make a purchase, I might receive a small commission that goes back into keeping the blog running and providing free recipes for you all. Thank you so much for your support.

Are there any foods that can't be improved by wrapping them in bacon? 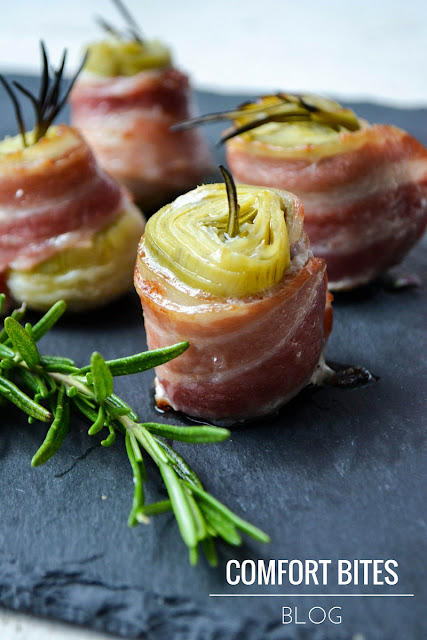 I was making a salad one day using canned artichoke hearts and ham and I suddenly paused and looked at the two together on the chopping board. Artichokes. Bacon. I looked out in the garden at the rosemary bushes.

Yes. This would work.

The artichoke hearts have a really savoury flavour, and when they're roasted like this, it just makes that flavour that little bit deeper and earthier. The bacon adds a smoky saltiness. And the rosemary sprig pushed in the centre just gives it a fresh, pine-like scent.

It's a bit weird, but in a way, these bacon-wrapped artichoke hearts taste a bit like sausages. It's just something about how the flavours all mingle together. And they'd be a great alternative to those bacon-wrapped mini sausages that get served with the Sunday roast or Christmas dinner.

Artichoke hearts are a good source of magnesium, potassium and Vitamin C, among other things - so adding a few to the side of your plate can only be a good thing. Unless you're watching your FODMAPs, that is, in which case you could make these but use slices of parsnip maybe instead of the artichoke hearts. Just roast until softened, or pre-boil them beforehand and cool and dry them before wrapping the bacon around them and roasting. 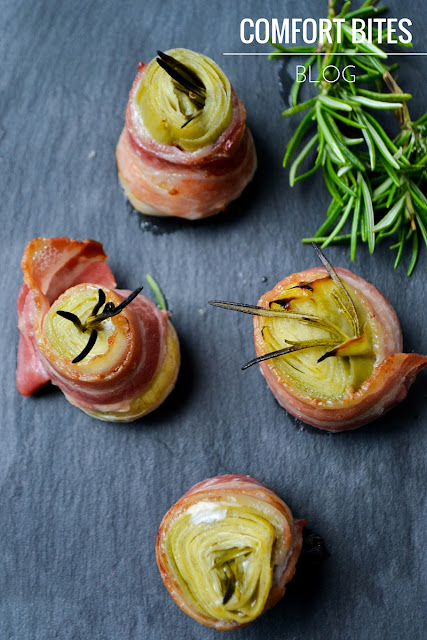 They're great for serving alongside roasts or just for fun - take a batch to a party or barbecue as an appetizer. I hope you love them as much as we do.

Method
Drain the can of artichoke hearts and place them on a board, patting them dry with kitchen paper or a clean towel.

Have a pile of 8 cocktail sticks handy and then take the bacon and wrap it around the outside of the artichoke heart. You might not need the whole rasher of bacon, depending on how long the slices are, in which case cut the bacon off and use to wrap around the next one. Secure each bacon-wrapped artichoke heart with a cocktail stick, to stop it unravelling in the oven. Poke a rosemary sprig in the centre of each artichoke heart and drizzle with the olive oil.

Made this recipe? Tag me in on your social media posts so I can see - I always love to see your versions of the recipes from the blog! I'm on Facebook, Twitter and Instagram. Speak soon!