One of the first things I noticed about Easter in Argentina is their long Easter holiday. Where I was staying, they leave work on Thursday so they get Good Friday off and they don't go back to work until the following Wednesday. And there were only a few corner shops actually open over those days, not like at home when we say it's Easter weekend and then continue to shop for groceries, take books back to the library and pay money in at the bank.

Another thing I noticed was this: Rosca de Pascua, the Argentine's traditional Easter bread. At a visit to the panadería (bakery) on Easter Sunday morning (they were open just to sell facturas for Easter breakfast) I was transfixed by rows of beautifully decorated brioche-like breads. I was surprised that none of them had whole eggs baked inside or onto them, but I was told that although some families still do, the Argentine government have warned that the eggs may not be safe and can transfer bacteria from the shell onto the bread. And although many families now buy their Rosca de Pascua in from the panadería, my niece decided to make one from scratch. Here's how the Argentine Rosca de Pascua is made. 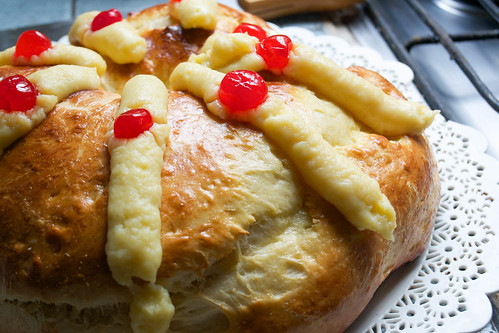 First, warm milk is mixed with beaten eggs and fresh yeast and poured into a well of flour (called a 'corona', or crown). Gradually, just like when you're making bread, the liquid is pushed into the flour with the fingertips, taking care not to break the 'crown' so you don't end up with eggy liquid running over your worktop.


Next, the dough is kneaded, until the liquid is absorbed. Then, soft pieces of butter are kneaded into the bread. This seems to take ages and the dough becomes sticky. Gradually though, and with lots of kneading, the butter is all absorbed. The kneading now continues, until the dough is no longer wet or sticky and comes away cleanly from the work surface each time it's lifted. 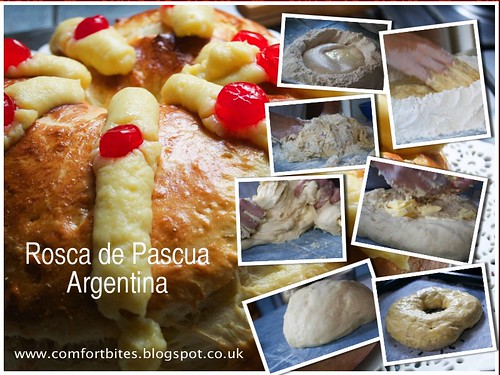 The dry, silky-looking mound of dough is then left to rest, before being rolled out into a sausage shape and then the two ends pushed together to form a ring. The dough is placed onto a buttered and flour-sprinkled baking tray and gets another rest under a damp tea towel to rise, before being placed in the oven for about 20 minutes, to cook.

The traditional shape is a ring, although our dough rose a little more than we expected and although you could still see the 'ring' shape, it wasn't as prominent as the ones in the bakery. The bread is then cooled until it's just warm and then decorated with crème pâtissière and maraschino cherries. Once it was decorated, we cut chunks of it and ate it, still slightly warm. It was rich and eggy, a lot like brioche, but with a stronger yeasty flavour and slightly less sweet.

Have you ever tried Rosca de Pascua, or any other Easter breads from around the world? 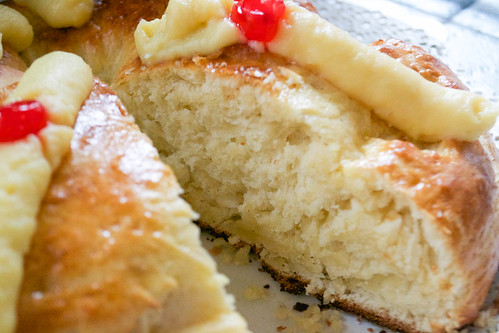