You can't beat a good bread recipe. I used to make all our loaves of bread myself, but it fell by the wayside a bit and now I usually rely on a couple of loaves of Hovis or similar from the supermarket. All those hours of kneading, proving and tucking cling-filmed bowls of dough into the airing cupboard were great, but I still hadn't appreciated how versatile bread can really be. 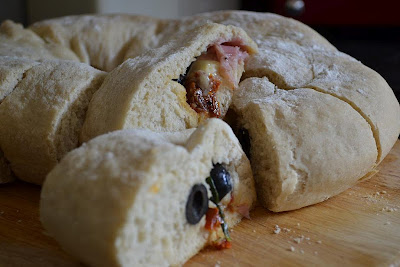 The other day I made this pizza bread, which is perfect for hacking off pieces whenever you're hungry, sliding into packed lunch boxes for the kids or for taking on a picnic or day out. I used this recipe - I've tried lots of bread recipes over the years and I find it the most reliable, producing a dense but still a fluffy-crumbed loaf. 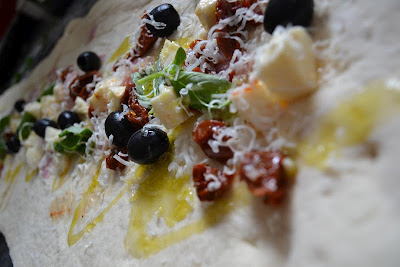 All you do is after the first proving, roll out the dough to about a metre long. You fill the inside with cheese, sundried tomatoes, olives, ham and whatever else you can find in the fridge and roll it over into a tube. Then you bring the ends around to make a ring-shape. Leave it to prove for another fifteen minutes or so and then slide it into the oven for 35 minutes. This, for me, is at its absolute best eaten still slightly warm, while the mozzarella is still stringy and the bread has that lovely yeasty taste. Make sure, unlike me, that you get the filling quite a way up to the edges of the dough before rolling it up. Mine had a great big bready crust without any filling in it. So I'll pay attention next time to this, maybe even rolling it up like a swiss roll would have been better...


Check out the original Jamie Oliver recipe for the 'rolled bread' on his website. The only thing I would say is that with his recipe (which uses 1kg bread flour) I made two of these, and they are whoppers. You can always make bread rolls with half the dough and roll the other half out to make this, which is what I would do the next time. But it's a great way to use up any antipasti after a party or those opened, half-eaten packets and jars of olives and sundried tomatoes that often get left in the fridge.