This post contains some affiliate links. This means that if you decide to go ahead and make a purchase, I might receive a small commission that helps me keep the blog going. The price you pay stays the same, regardless. Thank you for your support.

Tarragon. It doesn't rate as highly in the popularity contests as, say, parsley or basil, but its punchy, sweet aniseed flavour works well with so many dishes.

It's traditionally paired with chicken, but it can also be sprinkled over fish (salmon and mackerel work well), lamb and beef. It helps cut the fattiness of meats like lamb, and I reckon you could cook it pretty nicely with pork, too.

I had half a bunch of tarragon leftover after making mayonnaise and I thought for a couple of days about how I could use it up. I thought about it. I woke up in the middle of the night with ideas. But one thing kept popping back to my mind. 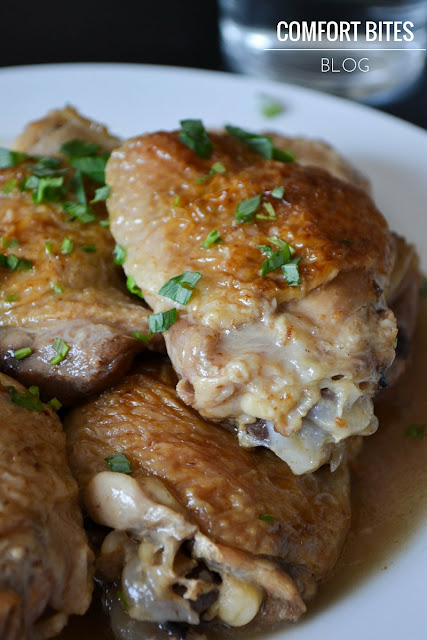 About three years ago, I made a cider and tarragon stew from Alan Rosenthal's book Stewed!. It wasn't the same recipe as this, but I remember how the tart, appley cider paired so well with the slightly citrussy, anise of the tarragon and I knew I wanted to taste those flavours again.

Also, it was one of the hottest days of the year and I didn't want to put the oven on, or stand for ages in the kitchen. Obviously.

I've used chicken thighs because they're tougher and denser and stand up better to slow cooking than chicken breasts. After cooking, the skin easily falls off, so you may want to remove the skin, shred the chicken meat off the bone, pull it apart with two forks and then pour over the sauce and sprinkle over the tarragon before serving. 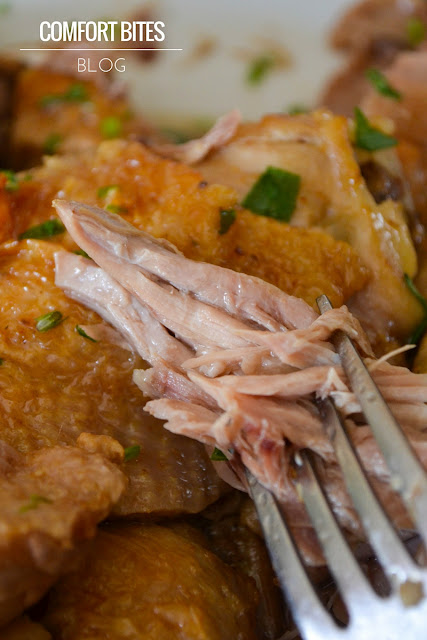 This recipe is paleo and AIP compliant - the cider does contain alcohol, but it's cooked for 4 hours so it's safe to say that most of it will be burned off during cooking.

I also love this because it takes just 10 minutes of actual work from you.

Heat the oil in a large saucepan and season the chicken thighs on both sides with salt. Fry on both sides until the skin is well browned. Using tongs, lift out the browned chicken thighs (cook them in batches if you need to) and place them in the bottom of the slow cooker's dish. Replace the lid, while you make the sauce.

Peel and grate the garlic cloves and add them to the pan you just browned the chicken thighs in. You should still have some fat left in the pan. Sizzle for about 10 seconds, stirring, and then pour in the cider. Let it bubble up and, using a wooden spoon or spatula, stir the garlicky cider, scraping up any browned bits from the pan left after frying the chicken. Once the cider has reached simmering point, lift the lid of the slow cooker and pour the sauce over the chicken.

Replace the lid and leave to cook on 'high' for 3-4 hours, or until the chicken thighs are well-cooked, tender and falling off the bone.

To serve, either shred the chicken off the bone and arrange on a plate or lift up the thighs and arrange on a serving plate, as they are. Pour over the sauce and quickly chop the fresh tarragon leaves, scattering them over the top of the cooked chicken. Eat hot.

Interested in how to use herbs and spices on the autoimmune protocol? Just because you might be working from a shorter list it doesn't mean you can't be creative with your cooking. My ebook SPICE is now available on the Amazon Kindle store, and contains over 90 recipes featuring herbs and spices on AIP.

I've entered this recipe into this week's AIP Recipe Roundtable by Phoenix Helix. Go check it out here.