CBD Oil and Psoriasis - My Experience

Can CBD oil help improve psoriasis? I tried some. And this is what happened.

This post contains some affiliate links. This means that if you decide to click on any of the links and make a purchase, I may, at no extra cost to you, receive a small commission that goes back into helping me keep the blog running. Thank you for your support.

Everyone is going on about CBD oil, aren't they? I've heard it being used for so many different health conditions, and, considering that it was probably the only thing I'd never tried for my psoriasis, I decided to give it a go.

So I found this zero THC oil from Truth Naturals. The idea is that you just put a pipette full of the liquid (CBD oil mixed with MCT oil) underneath your tongue, leave it there for 60 seconds and then swallow. It enters your bloodstream and does, supposedly, good things to you. The fact that it has no THC means that you don't actually get giggly or spaced out at all. The psychoactive compounds have all been taken out, so you're just left with all those brilliant cannabidiols.

Now, here, I feel it's worth a little recap in case you don't know me. I've suffered with psoriasis since my teens - steroid creams just ended up getting stronger and would stop working after a few days. I tried the autoimmune protocol diet and lifestyle changes (AIP) and it cleared 90% of my psoriasis. I have some left on my scalp. And I'd really like to start wearing black clothes again, thanks very much.

So I placed my order, for some of the natural-flavoured oil, and kept a lookout for the postman. 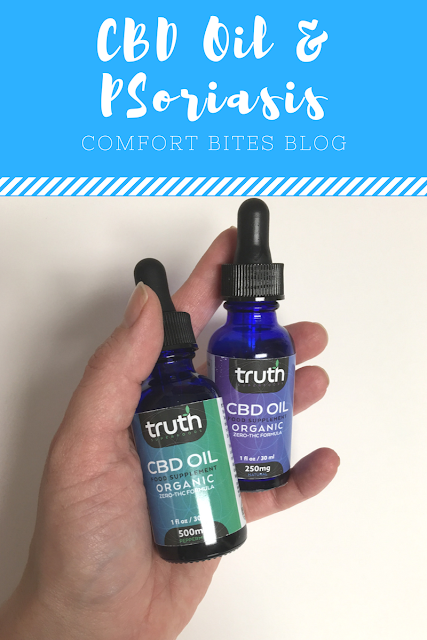 The oil arrived really quickly, and was well packaged in a neutral envelope. It's funny - Truth Naturals CBD oil is totally legal here in the UK, but there is an aspect of naughtiness as you try it for the first time. Friends I told were either like: "Wow, good for you, I hope it works", or just raised their eyebrows at me slowly and asked if I'd like some chips.

I gave the bottle a shake, and then squeezed the little pipette in the top, to fill it up - and then dangled it in the air and squeezed it all out underneath my tongue. I had to keep it there for 60 seconds, to give it a chance to enter my bloodstream. Straight away, I felt calm. Like super-relaxed, for just a few minutes. It's funny, because it never made me feel like that again - I wondered if it was either some kind of imaginary placebo effect I'd given myself or just a one off thing from the first time I'd used it. But hey.

The taste was weird - not bad, but not pleasant particularly - it tasted musty and earthy. The good news is that it also comes in lemon and peppermint flavours, though (I later bought the peppermint one, which is the one I'm using now).

I continued to take my dropper of oil every day, after breakfast. And on the third day, I noticed something. My psoriasis itch had changed. It was kind of tickly, like a tiny spider running through the patches (a dig around in my hair by my husband confirmed there was no tiny spider). It no longer had that hot, raw, burning itch that I was used to. I got my husband to check and he said the patches were looking a lot less red and sore. This was new. So I kept going.

I found that I was able to react more rationally and calmly to stressful situations. This was new, too.

I thought I'd try and speed things up a bit and I emailed Truth Naturals to ask if I could actually rub the oil into my skin. They said I could, so I massaged a dropper full (of the natural one) into my itchy patch at night.

And then, stupidly, I got complacent, right at the point when I was seeing a difference. I started eating more sugary treats, grabbed a slice of pizza, stayed up late and generally went a little bit off the rails. The old familiar burning itch returned. I felt like rubbish. I remembered why I eat vegetables and avoid processed foods and gluten in the first place and got back on it pretty quickly.

As I write, I've been using the Truth Naturals peppermint CBD oil under my tongue once a day, usually before bed. And when I feel itchy, I just massage in a dropper of the natural CBD oil into my skin, and it really seems to stop the itch at the time. It's been about 2 months. The itch is much less, and when it does itch it is light and tickly rather than burning and sore. The psoriasis bumps feel flatter when I run my hand through it. I have high hopes for this.

I have no idea if this will heal my psoriasis completely, but I can tell you for definite that it is helping, along with a gluten free diet full of veggies and nutritious things. It's kind of taken it up a gear, added to the other stuff I was doing as well. The flakes that fall from my scalp are much finer and smaller, no longer big, flat white flakes. And there's not so many of them, too. It's interesting as well, that I feel calmer and more controlled. I know for sure the oil is having some good effects on me and I'm keen to see how I am in another month from now.

I'll have to update you.

In the meantime, if you're also curious about the CBD oil I've been using check out the Truth Naturals website. You can buy the oil in different flavours and also different strengths. I'd definitely say start with the lowest dose and if you feel like it, you can get a slightly higher one next time, but the website does give you recommendations on what to choose. I started at 250mg and then went to 500mg but I think I'll stop there, as I'm noticing I feel more tired in the evenings since switching up.

Just to confirm - Truth Naturals oil is zero THC - so it doesn't have any of the psychoactive element left in it, that usually makes people get giggly and a bit spaced out. Many people who have tried the oil have said that it does make them feel more relaxed, which could be why I feel like I sleep better (and more readily!) in the evening.

And people use Truth Naturals for other reasons than psoriasis or for other chronic illness. Some people use it to help them sleep or for athletic reasons. Go along to the website to find out more and read some of the reviews yourself.


Also, some brilliant news! Truth Naturals have offered to give all you UK Comfort Bites readers £10 off your first order with them, if you use the code 'JO10' at checkout.

Go and find out more here.

Have you tried CBD oil? Has it worked for you? Let me know in the comments below!