A review of the Lebanese canteen, Comptoir Libanais at The Oracle, Reading - along with a movie night at The Vue cinema, with a peek at Comptoir's special Mother's Day menu and hamper gifts for next weekend.

I received a contribution towards the cost of creating this post from The Oracle, Reading - however all opinions are my own and are completely honest. Huge thanks to them for their support.

I've had my eye on Comptoir Libanais, the Lebanese canteen at The Oracle's Riverside for a while, always peering in as I walk past on my way to the shops. It's just opposite the Vue Cinema, on the other side of the river and across the bridge. I'd been waiting for an excuse to go since they opened. And when I (or rather, my daughter) was asked if we'd like to try out their menu together ahead of Mother's Day this year, I absolutely couldn't wait.


The idea of going to Comptoir for Mother's Day is particularly special. The founder of the restaurant chain, Tony Kitous, often refers to his mother as his inspiration in his recipes and cookbooks, as she shaped his cooking style and played a huge part in his later success. It feels good to celebrate and appreciate how our parents shape and mould us and inspire us to take up different hobbies, careers and interests in a setting that genuinely does the same. So they're offering something special for Mother's Day this year. Head on over (book first, I expect they'll be busy) and enjoy a special Set Mother's Day menu, as well as hampers that you can pick up and take home, containing authentic Middle Eastern ingredients such as Turkish Delight and Rose Water, as well as one of Tony's cookbooks, for you to recreate your favourite dishes at home. The Mothers Day Feast Menu includes Mezze to share, including Chickpea and Broad Bean Falafel, Labneh Beetroot, Cheese Samboussek, Pickes and Tabbouleh with pitta and dips such as Hommos, Baba Ghanuj. For mains, you get to choose between Spiced Lamb Kofta with vermicelli rice, Chicken and Green Olive Tagine or Sea Bass Samké Beiruti. There's also a Aubergine and Feta Shakshuka for vegetarians. And they're offering a dessert of either Dark Chocolate and Cardamom Tart or Rose Mouhalabia Milk Pudding - a traditional Lebanese milk pudding flavoured with rose syrup and topped with toasted pistachios. Talk about a special meal. Sounds fantastic. Pop in for more details, or give them a ring. You can also visit Comptoir Libanais website here.

We pushed open the door against the blustery snow and were immediately met with the warm aroma of grilled meats. A good start. We took a seat at the far window, which faced out onto the river, and had a flick through the menu. My daughter asked for some water, although I did try to tempt her with the tasty sounding, home-made lemonades - like pomegranate and orange blossom, or lemon and lime. I settled for an Iced Fresh Rose Mint Tea, which was the best iced tea I'd ever had. The server said if I wanted more sugar, to just let him know, but it was perfect. Fresh and fruity, with an aftertaste of rose, and not too sweet. A change from the standard fruit juice that's usually offered elsewhere, when you want a non alcoholic option. Gorgeous. I decided, on first sip, that I'd get back in there even just for the iced tea.

Comptoir is colourful on the inside, with Middle Eastern pastries piled up in the windows and vividly coloured handbags (sent from villages in the Middle East) hanging up that you can buy, too. Upbeat music trickles out, and the whole atmosphere feels lively and exciting, but also tranquil and laid back. There's no fussing over napkins, cutlery, food. It's all so laid back, which I love. And you can see your meal being prepared in the kitchen over the counter.

Our food arrived quickly - my daughter had a grilled halloumi cheese salad, which came with a dressed leafy salad and olives (careful though, the stone's still in them) and I asked for the mixed grill, but checked if I could make it gluten free. No problem, I was told - the vermicelli rice would be switched for quinoa and the flatbread would be left out. It was all sorted. Other restaurants I've been to in the past have asked me why I eat gluten free, whether I'm 'really' celiac, rolled their eyes at me. Here, there was none of that. The staff were friendly and the service was fantastic.

My mixed grill was gorgeous - three different grilled meats - a lamb kofta, chicken kofta and a chicken shish taouk. There were a couple of dips on the side - one garlic, and one harissa. A pile of seasoned quinoa, with a grilled tomato and salad on the side. It was slightly spicy, but not too much - I'm a wimp when it comes to spice, and I loved it. I saw bowls of hot tagine coming out to diners and decided I'd get that the next time. And then I saw burgers and thought the same. Basically, I'm going to be back trying everything on the menu.

The portions were just right, and we were able to leave a little room for dessert. We decided to share a portion of the Dark Chocolate Orange and Cardamom Tart. The cake was fugdy and dense and warmly spiced with the cardamom. The natural yoghurt on the side, sprinkled with pistachios and almonds, just gave it the right amount of tartness to contrast the cake, which in all fairness, was more spiced than it was sweet. I often find that if food is too sweet, it takes away some of the flavour of the ingredients in it - this wasn't the case here. We absolutely loved our meal at Comptoir, and I'm going back. In fact, it's all I can talk about since. Was there anything that could be improved at Comptoir? I don't know if there is. Foodie-wise, there's enough here to keep you interested - you can purchase rose water, baklava pastries and the like, in the restaurant. It's a warm, friendly and laid back surrounding, but the staff are still attentive to you, and polite. I like that there's no fussing or having three different people check on you through your meal. You're checked on that everything's ok, and left to eat. We did go on a slow night - there was a blizzard outside, and apart from us, there were just 3 other tables eating. I'll go back when it's busier and if I can think of anything else I'll add it here. But I'd definitely recommend it, especially for a treat or special occasion. Plus, the fact that the other three tables of people trudged through the snow, weather warnings and minus seven degrees to eat there, speaks volumes. 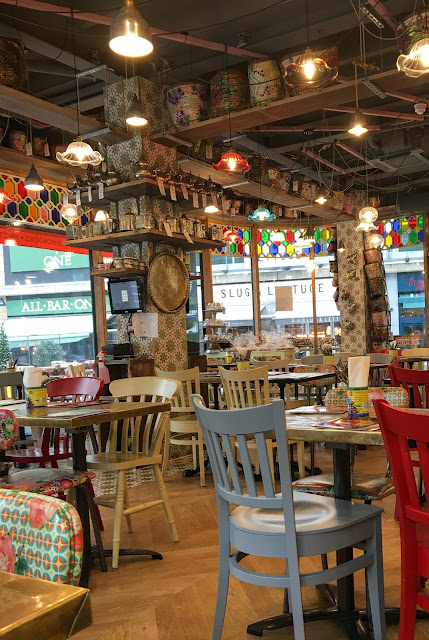 After the meal, we donned coats and scarves and headed off to the Vue Cinema to see The Greatest Showman - the first shock I got was when Hugh Jackman started to sing - I didn't realise it was a musical. But the dancing, the singing, the effects - were incredible and I couldn't take my eyes away from the screen. We can't wait for it to come out to buy or rent, so we can see it again, with the rest of the family. The cinema has a range of films, so if your Mum's into horror, or comedy - you'll find something else that suits. But The Greatest Showman is a real family story - without giving too much away, it makes you feel grateful for what you have, and puts a spotlight on how important our families (and Mums, obviously!) are to us. Definitely recommend!

Curious to find out what's on for Mother's Day, and the days leading up to it? Check out the Reading Vue cinema times here.


For more information about Comptoir Libanais, visit the website. Have you made plans for Mother's Day? What are you all up to?