I Try Out The BetterYou Vitamin D Testing Kit

A look at the new vitamin D home testing kit from BetterYou, and the campaign that launches this week, to help raise awareness of vitamin D levels in the UK.

This post contains some affiliate links. This means that if you decide to click on a link and make a purchase, I may receive a small commission that goes back into helping me keep the blog running. Thanks for your support.

There's been a lot in the news about vitamin D. And yet, it's something many of us just don't think about. Here in the UK, we're heading into autumn and that means colder weather, more layers of clothes on and more time spent indoors cosying up to a mug of hot chocolate. It also means it gets darker earlier, and greyer skies generally, during the day - sometimes the sunshine barely makes an appearance at all.

All this could potentially mean that many Brits are vitamin D deficient during the winter, as the main way we get it is when our body converts it from the sunshine. Clever.

So how would you know if your vitamin D levels were low?

Vitamin D plays a vital role in our health, and a deficiency could show up as general wintertime health problems, like cough and colds - or feeling tired or fatigued. It's also linked to seasonal affective disorder, low mood and is important for our bone and dental health. You can get it from some dietary sources, like oily fish, but it's estimated that only 10% of our vitamin D intake comes from our food. I was shocked to discover that NICE estimate that 10 million of us in the UK have low levels of vitamin D. You can also have a read of Izabella Natrin's article about why women, in particular, should track their vitamin D over the winter time.

I've been into the doctor with all sorts of autumn and winter niggles and I'm pretty sure they've never tested my vitamin D levels. And if you're curious as to what your levels are, then it's a good idea to get tested, before splashing out on supplements. After all, you might be in the normal range and won't need the supplement in the first place, or by taking it, you might tip yourself over into overdoing your vitamin D. And you don't want that.

The people at BetterYou contacted me and asked if I'd like to try out their home testing kit, which would reveal my own vitamin D levels, especially as it's Vitamin D Awareness Week this week. I said yes, and I received my kit a couple of days later.

It was simple enough to do. I just had to prick my finger using the supplied lancet and then let a few drops of blood fall onto a card, where specified. You let it dry, seal it up and post it with all your information written on the card. The test is supervised and all results are reviewed by specialist NHS staff - they'll be emailed to you a few days (up to 8 working days, but mine took less) after testing. 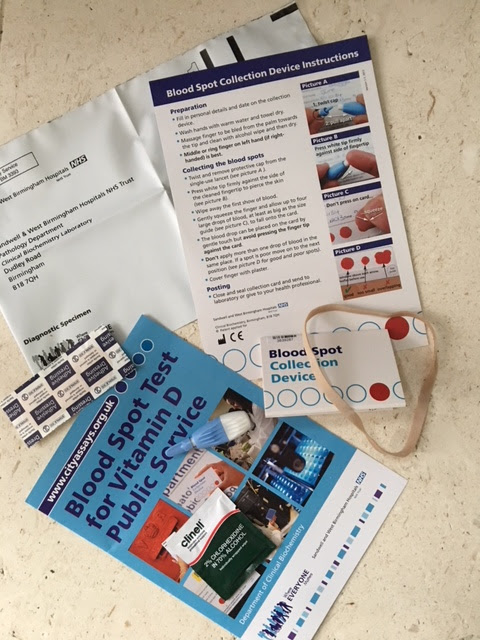 It's all really easy and I'm actually really awkward about doing things like this, so if I can do it, you can do it too. I was surprised at how detailed the results were and how simple they were to understand. It came with the measurements, but also a colour coded explanation with a coloured dot where my results were, so I could see where I fit in to the spectrum. Mine came back in the 'adequate' range, so it's all good for now. We're just fresh out of summer though, so I'd be interested to test it again later in the winter to see if it's dropped.

In addition, once your results come in, you're contacted by someone from BetterYou to discuss how you could keep your vitamin D levels up, or give them a boost if that's what you need, to help keep you going through winter. They do a range of oral sprays, which is what I've traditionally taken throughout the winter previously and are absorbed quickly into the bloodstream.

BetterYou distribute this kit as part of a collaboration with the Sandwell and West Birmingham NHS Trust and you are sent everything you need to complete the kit at home. It gave me peace of mind, as I know there is often a link between psoriasis (what I have) and low vitamin D levels, but in my case, it seems like it's all good, at least for now.

Click on for more information on BetterYou or their campaign to Fight Your Vitamin D-Mons for Vitamin D Awareness Week and let me know what you think.

Have you had your vitamin D levels tested? Is it something you'd consider?