This post contains some affiliate links. This means that if you decide to click on a link and make a purchase, I might receive a small commission (at no extra cost to you), which helps me keep the blog going. Thank you for all your support.


So, did you hear there's a new paleo pasta out? Gluten free and everything.

They have some made from quinoa, millet and sorghum. They have others made from green banana, sesame seeds or flaxseed. All good. And no weird ingredients, or fillers. For example the sesame seed one contains egg, sesame flour and tapioca. That's it.

I was sent some to try, from Nomad Health. And I decided to make a recipe with it.

The pasta itself is very similar to regular pasta - it hold its shape really well, and it doesn't disintegrate to mush in the pan. The only thing with the sesame seed pasta is that you can't stir it too much, or the individual penne will break up. The sesame seed one, the one I tried first, has a beautiful earthy, sweet flavour. I decided to use it in a zesty lemon pesto with peas and pea shoots. 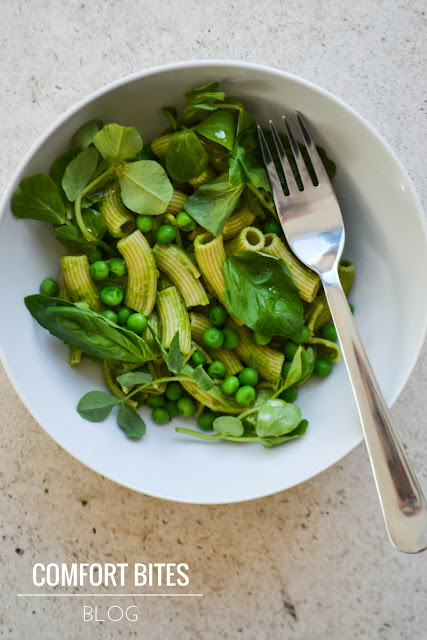 You wouldn't really guess, I don't think, apart from the subtle sweetness in flavour, that this penne wasn't regular pasta. It was less starchy, of course, but held its shape really well. You also only need to cook it for 3-5 minutes, so it's on the table much quicker than regular pastas, which boil in nearer 10 minutes.

We tried the green banana pasta and it was beautiful - firmer than the sesame seed one, and held together really well after cooking. Ready in 5 minutes, it tastes like a really good wholemeal type of pasta. We ate ours with some cooked chicken breast, asparagus and pesto. BEAUTIFUL.

Oh, and don't be put off by the weird orange glow in the photo - I took the photo late afternoon when the sun was quite low in the sky and as I took it, the clouds separated and bathed my living room with a beautiful golden glow. Which was pretty cool.

Paleo pasta. It's here, in the UK. I hope you love it. Check out the Nomad Health website for more details. 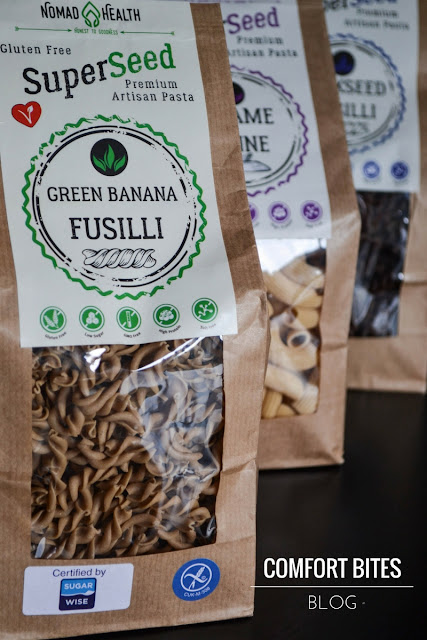 Method
First, bring a pan of water to a boil and add a good pinch of salt. Tip in the pasta and cook for about 5 minutes. It does have a tendency to break up, so only stir it once, gently.

While the pasta is cooking, put the basil leaves, lemon juice, salt, half the peas and the extra virgin olive oil into a blender, and blitz to form a pesto.

Once the pasta is cooked, drain it well, and then return it to the pan. Pour in the pea pesto you just made, and tip in the remaining peas. Let everything warm through in the residual heat of the pan, and toss everything together, very gently. Serve with the pea shoots and season with extra salt, olive oil or lemon juice to taste.