Discloure: I received the meat for this recipe, as well as a contribution towards the other ingredients used, from Farmer's Choice.

So there I was, standing in the kitchen, bunch of parsley in my hand, talking to my husband and making lunch. I told him I was making chimichurri.

He frowned at me over his glasses and said, quite sternly: "You're not going to do a Rick Stein, are you?"

My husband is from Argentina, as are his Mum and Dad. But his grandparents on his Dad's side are from Spain. And, just as he's protective over his chimichurri (no peppers, chillies or other things please), he's protective over the Spanish food his grandmother used to cook for him when he was little.

I phoned him up one day at work, a few years ago, and told him that I'd bought Rick Stein's book about Spanish food, which was brilliant because it meant I could cook him some of the authentic food he loved as a child. 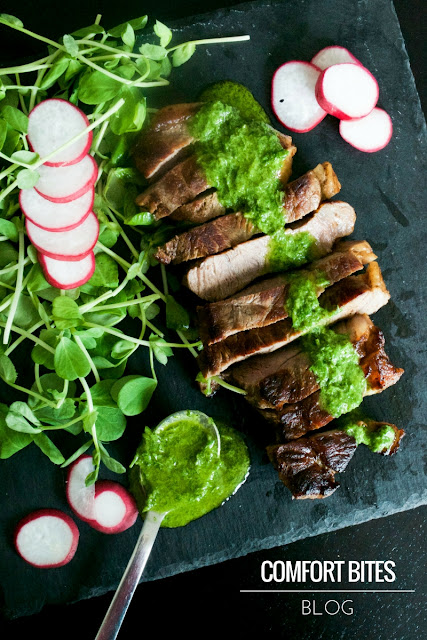 Rick Stein's recipes, as we learned as I cooked dish after dish from the book, were (according to him) more of a modern interpretation of traditional Spanish dishes. Spanish food isn't spicy, he'd insist. He'd huff at the flecks of chopped chillies liberally scattered into pretty much everything. So now, at home, if we take something and 'mess about with it' (his words, not mine), it's called "doing a Rick Stein".

And I was about to mess with the Mothership. The food I was shown how to make with all seriousness when I was in Buenos Aires. The food I watched his relatives all wrinkle their noses up and shake their heads when I asked if you ever added anything else to the mix.

I told him no, of course not, as I stuffed the parsley into the blender with the garlic, olive oil and vinegar and watched him walk out of the kitchen. 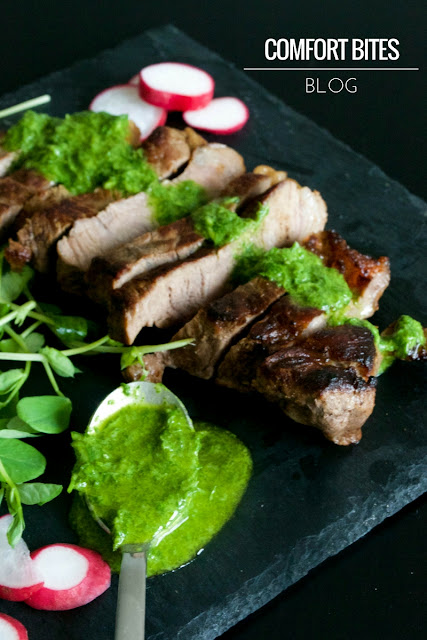 I paired the 'messed with' chimichurri with a buffalo steak, from online butcher Farmer's Choice - it has a rich flavour, very like beef but a bit lighter and leaner. We loved it.

Method
First, cook the steak. Melt the butter in a large frying pan or griddle and add the olive oil. Season the steak with a pinch of salt on both sides and then lay it down into the foaming butter/oil mixture. Fry for 5 minutes on the first side and 4 minutes on the second - this will give you a medium-well steak, but alter the cooking times depending on how you like your steak.

Once the steak is cooked, lift it out onto a chopping board and leave for 3-4 minutes to rest while you make the chimichurri.

Blend the parsley, garlic, extra virgin olive oil, salt, cider vinegar and the Dijon mustard until smooth and scrape out into a serving dish.

Arrange the steak on a plate and serve the chimichurri over the top. 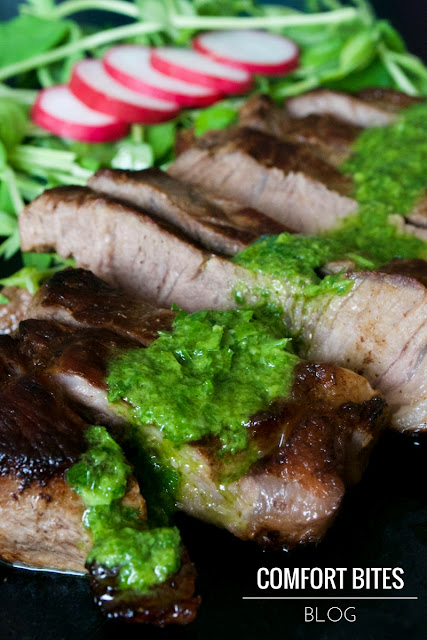 See this gorgeous buffalo steak? It came from online butcher Farmer's Choice. Do go check out their website for more game, meat and fish.