This post contains affiliate links. This means that if you click through and make a purchase, the price you pay stays the same but I might receive a small commission to help keep the blog running. Thanks for your support.


I used to hate scallops, but I don't now.

And do you know what changed it for me?

A couple of weeks in the Isle of Man in 2002 with my then boyfriend and his parents. We spent a beautiful sunny day bobbing about in a boat in the Irish Sea looking at basking sharks, their mouths gaping wide just under the surface of the water beneath the boat. We watched their black fins flicking above the surface in the distance. It was an amazing day.

And then we got off the boat, stopping off to get some Isle of Man Queenies before we went back to the house.

My boyfriend's mum served the big, fat scallops (with the roe still attached) alongside boiled potatoes, apparently a bit of an Isle of Man tradition. And then I was hooked. Sweet, soft and really nutritious.

Hating scallops. What was I thinking? 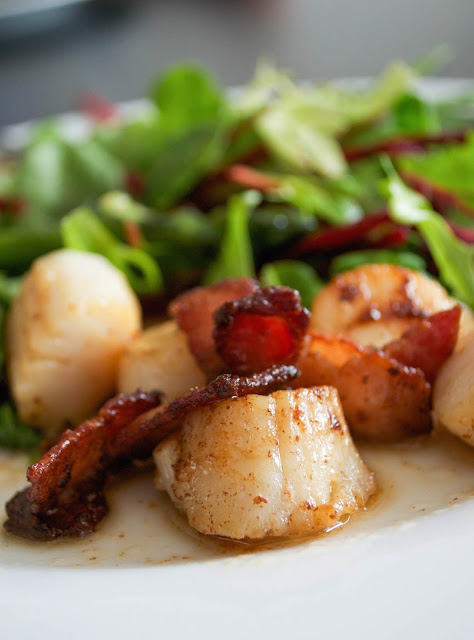 Nowadays, I eat scallops mostly with bacon, because I love the way the sweet scallop works so well with the crisp, salty, smoky bacon. It's like angelic, pale scallop next to dirty, crave-worthy bacon.

Here, I've used butter because I think it gives it a creamy, salty flavour. If you can't eat butter then do sub in avocado oil, olive oil or lard. If you have any bacon fat handy then by all means use that. 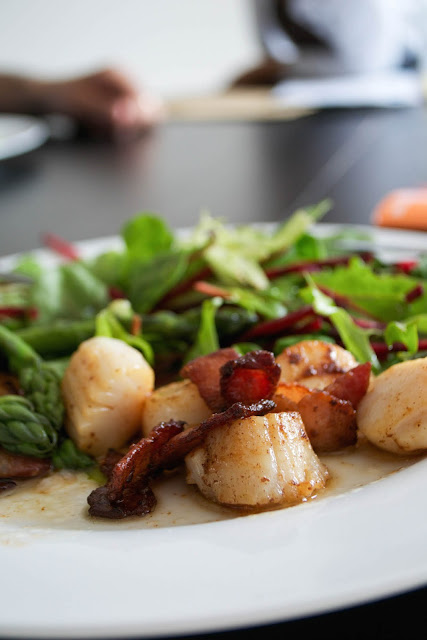 Pan Fried Scallops and Bacon
Serves 2
Ingredients
4 rashers smoked, streaky bacon
1 tsp salted butter (use olive, avocado, ghee or mild (unflavoured) coconut oil for AIP)
10 scallops (mine were quite small), fresh as you can get
optional - pinch of salt, if needed, to taste

Method
First, just heat a frying pan on a medium heat and lay the bacon out, dry-frying it so it starts to turn crisp and the the fat renders down into the pan. Once the bacon's cooked through, slightly crisp and golden - lift it from the pan and put to one side, on a plate.

Add the teaspoon of butter to the bacon fat now in the pan and heat gently, until the butter starts to foam. Swirl it around the pan and add the scallops, placing them like the numbers on a clock, starting at 12. You'll see the scallops immediately contract as they hit the hot pan - leave them to sizzle for about 2 minutes and then turn each one over, in the order you placed them (start at the scallop in the '12' position). This way, you won't over-cook the scallops. Leave them to cook for another minute or two. The centre should still be juicy and the outside of the scallop golden, where it's caramelised in the pan. The centre shouldn't be jelly-like or uncooked - it should just be cooked through and still juicy.

Serve the scallops with the buttery-bacony juices and the bacon rashers alongside. A salad is perfect for this, as it's quite light - or serve alongside some summer veg like broccoli or asparagus. 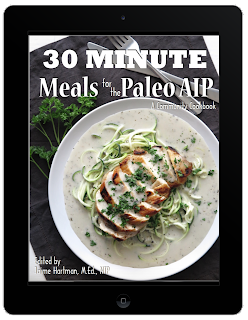 Do you want to know which herbs and spices you can use on the autoimmune protocol? I've written a 90+ recipe ebook called SPICE that deals with AIP compliant herbs and spices and suggests new ways you can perk up your cooking. Download it now, on your Kindle device or Kindle app.