This post contains some affiliate links. This means that if you click through and decide to make a purchase, the price you pay stays the same but I might receive a small commission that goes back into keeping the blog running. Thank you for your support.


You know what can get boring on the AIP diet?

You're there, with your can of tuna flaked into a little bowl with some salad leaves looking over at everyone else with their quiches, cheese scones, pork pies and sausage rolls. A tuna salad is tasty enough, but sometimes, when you're restricted with what you can eat, it does get a little bit boring. Just a little bit. I know there's more to AIP than tuna salads. But sometimes you just want something a bit different.

But not any more.

Because I have made you all some Arrollado de Carne. (It's pronounced ARROJZ-ADO DE CAR-NEH). Gorgeous. 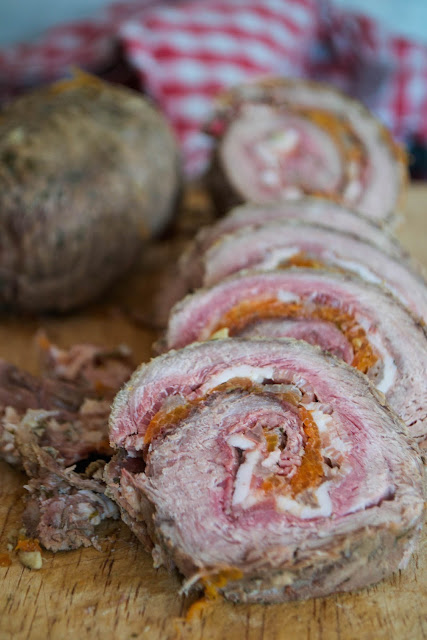 When we went to Argentina, all anyone could talk about was Matambre. They kept saying that they would make me Matambre that night for dinner, but then we'd end up at a restaurant or at someone else's place and never got around to it. For anyone that doesn't know what the heck I'm talking about, Matambre is a big thin cut of meat from the belly of the bullock, that's laid out on a board, spread with hard-boiled eggs, veggies, herbs and then rolled up, tied and boiled for a couple of hours. It's then cooled and sliced into rounds.

Well I made it with Bavette Steak from Farmer's Choice, which, as I found on the internet, wasn't really suited to frying like a sirloin, for example, unless you have it really rare. Otherwise it can be tough. The toughness of the meat I thought would work well then, if it was rolled up and then slow cooked for a few hours. And it did. 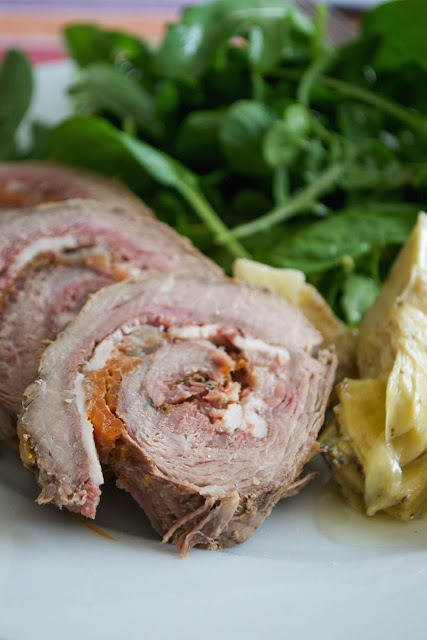 I think this is perfect for a picnic - you have the marinated, meaty outside and then salty, smoky bacon on the inside with some carrots, garlic and parsley. It's kind of similar to an AIP version of Matambre. Make it the day before, and slice it after a night in the fridge. Honestly, it's incredibly good. I'll definitely be making it again.

To cook:
1 onion, peeled and roughly sliced
hot water, from the kettle

Method
First, you'll need to butterfly your Bavette steak so it's long and flat. Place it on a board and carefully slice into its thickness, eventually opening it out like a butterfly's wings so you have one large, thin piece of meat. Don't cut all the way through, the meat should still be joined and in one piece.

Combine the ingredients for the marinade in a large roasting tray and add the steak, leaving it to marinate for at least an hour. If it's a hot day, this is probably best done covered, in the fridge.

Once the marinating time is up, get the roasting tray with the meat in, out in front of you and set your slow cooker on 'high'.

Leaving the meat in its marinade, thinly slice or peel (I used a julienne peeler, the kind I make carrot 'noodles' with) the carrot and arrange the slices all over the surface of the meat. Continue with a layer of the thinly sliced onions and finally arrange over the bacon rashers. Starting with the longest side of the meat facing you, roll up the meat very tightly, being careful to push back any of the veggies that try to escape, as you go. Tie it up securely with string.

Arrange the onion slices over the base of the slow cooker and carefully lift the rolled beef and place it on top. Pour enough boiling water so that it comes up about three-quarters of the way up the beef. Tip in any of the marinade that's still in the roasting dish and replace the lid. Leave to cook slowly for about 3 hours.

Once the beef is all cooked, turn off the slow cooker and lift it onto a plate to cool. Once cool, cover with cling film and place in the fridge to chill. Once well chilled, cut off the string and slice into portions. Beautiful eaten cold.

I received a contribution towards the cost of the ingredients for this recipe form Farmer's Choice, an online butcher who provide free-range meat in the UK. Go check them out!


Also, I've written two ebooks on the food and drink of Argentina - It's Not All About The Beef is a guide to the foods you can eat over there, and the other, Recipes Inspired by Argentina is a collection of recipes inspired by my trip there. The recipes are for non-specific diets and contain cakes, breaded dishes and desserts.