This post contains affiliate links. This means that if you click through and decide to make a purchase, the price you pay stays the same, but I might receive a small commission that goes back into keeping the blog running. Thank you for your support.


I didn't make pâté at home for years, thinking it was complicated and would end up too expensive to buy the ingredients for. Might as well buy the stuff in the shops, right?

Well, as I discovered, shop-bought pâté can contain things like cream, milk, potato starch, nightshade and seed-based spices - all things that can cause allergies in some people. And, quite often, the livers used are not from the highest-welfare animals. A pot of my favourite pâté would last me a couple of servings - and cost around £4. Nowadays, I make it myself, practically for free. My butcher chucks in a free bag of liver so all I need to come up with are the other ingredients, that I usually have knocking around the kitchen anyway. 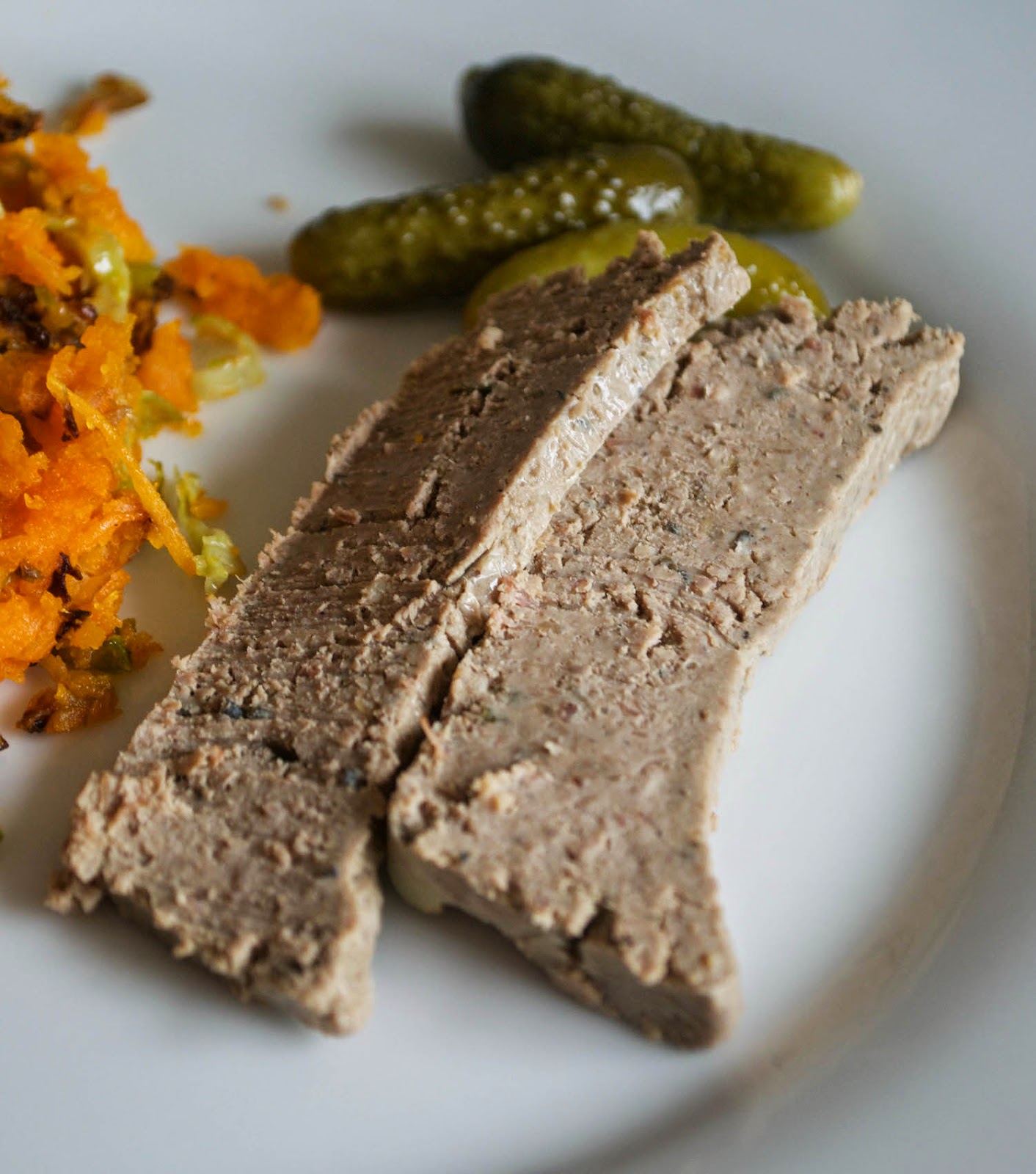 The pork liver pâté is sweet, and the bacon gives it a lovely smokiness and richness. Another wonderful way to get those nutritious organ meats into your diet.

I've adapted this recipe from The Paleo Mom's liver pâté - I often make it, and it's delicious. But there were so many changes and tweaks I made in the end that it became a bit unrecognisable from the original - so I've set it out here for you. 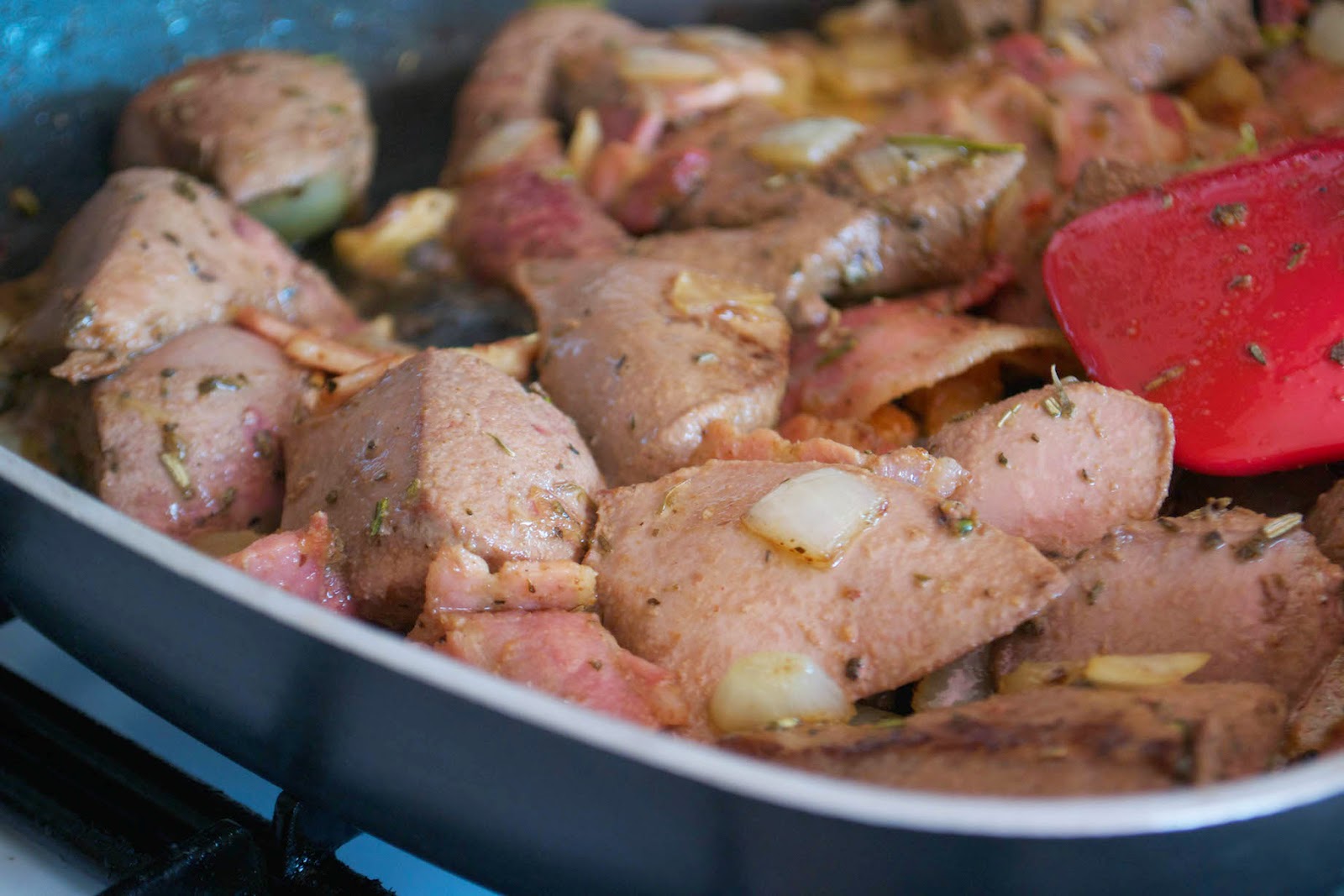 And one more thing: most chefs will say that you can ruin a pâté if you cook the liver for too long. And while everyone else cooks their livers until they're still pink in the centre, I choose to cook pork and chicken livers until they're JUST cooked through, because my young children eat this quite regularly and it makes me feel a bit better about it. But do what works for you.

Method
First, fry the bacon rashers in a dry non-stick pan until they are golden and some of the fat has rendered down. Lift the cooked bacon out of the pan and put it on a plate, to one side.

If you have any bacon fat in the pan, tip it into a measuring cup and top up with your choice of fat, to a quarter of a cup.

Put this quarter cup of fat into the pan and gently cook the onion and garlic until softened. Add the sage, rosemary, bay leaves, mace and thyme. Next, chop the pig's liver into bite-sized pieces and add these to the pan, shaking and stirring so they cook evenly. Chop up the cooked bacon rashers you reserved earlier and add these too. Once the liver has sealed on the outside, pour in the wine and let it bubble up for 2-3 minutes until the smell of alcohol has gone. Remove the bay leaves and tip in the remaining quarter cup of fat. Cook for another 1-2 minutes.

Once the liver is cooked to your liking, and the fat has melted, tip everything into a bowl and blend with a stick blender until smooth.

Scrape the mixture into a loaf tin lined with cling film, smooth over the top and leave to cool. Once cool, cover the top tightly with cling film so that it touches the surface of the pâté and keep in the fridge for 1-2 days before eating. The flavour gets better with a little time.

Once your 1-2 days are up, cut the pâté into slices and wrap with cling film, individually, before freezing. When you want to eat the pâté, take it out of the freezer and defrost in the fridge. Eat the same day.