When it comes to cooking with beer, it can be easy to reach for the stew pot or pie dish. But have you ever made a beer cake?

Nigella does a Guinness and chocolate cake, and the internet is awash with variations, with a dark, rich, malty chocolate sponge. But for my cake, I wanted the beer to be on the outside.

For the beer buttercream, you need to reduce the beer down - but don't worry, it doesn't take long and it's not complicated. You then pour the cooled, thick liquid into freshly-whipped buttercream for a boozy flavour.

I've used Bath Ales Barnsey bitter for this, although any rich, dark beer would work - stout works well too, as you'll see from my Mini Chocolate and Guinness Cakes I made earlier in the year. And I haven’t spread the buttercream all over the sides of the cake on purpose - the swirly frosting on the dark base reminds me of the froth on top of a freshly poured pint. 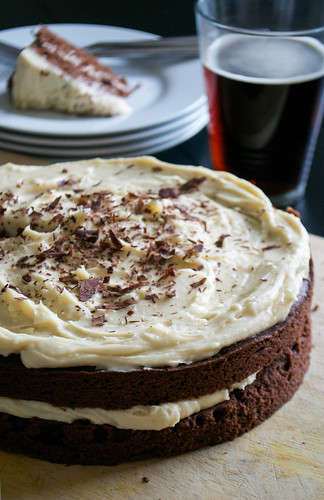 Method
First, make the chocolate cake. Preheat the oven to gas mark 5/190ºC/375ºF. Line two 20cm sandwich tins with greaseproof paper and a little butter around the edges and put to one side.

Melt the chocolate in a bowl over a pan of simmering water and set to one side. In a mixing bowl, beat the butter and sugar together until light and fluffy and then crack in the eggs. Pour in the melted chocolate and stir in the vanilla essence. Fold in the flour, the baking powder and the milk and divide the mixture between the two tins. Bake for 20 minutes, or until risen and firm, and a skewer inserted in the centre of the cakes comes out clean. Remove carefully from the tins and peel off the greaseproof paper, and cool the cakes on a wire rack.

Once the cakes are cooled completely, make the buttercream icing. Heat the beer in a small saucepan, simmering gently, for about 5-7 minutes. The beer will reduce down so you’ll have just a couple of tablespoonfuls of concentrated liquid. Let this cool.

Meanwhile, beat together the butter and icing sugar and then trickle in the cooled, reduced beer. Beat well - it’ll take on the flavours of the beer and a light caramel colour, too. 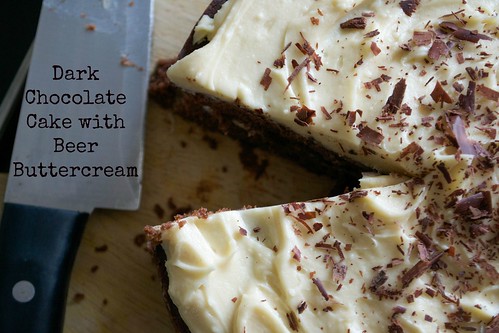 To make up the cake, place one of the cake layers onto a board or serving plate and spread half of the buttercream on top. Gently place the other layer on top, pushing down very carefully. Swirl over the rest of the buttercream, forming peaks. Scatter some chocolate curls or shavings over the top before serving.

This recipe appeared in the Food Monthly section of the Reading Post newspaper on 11 June 2014.