THIS is what I am talking about. 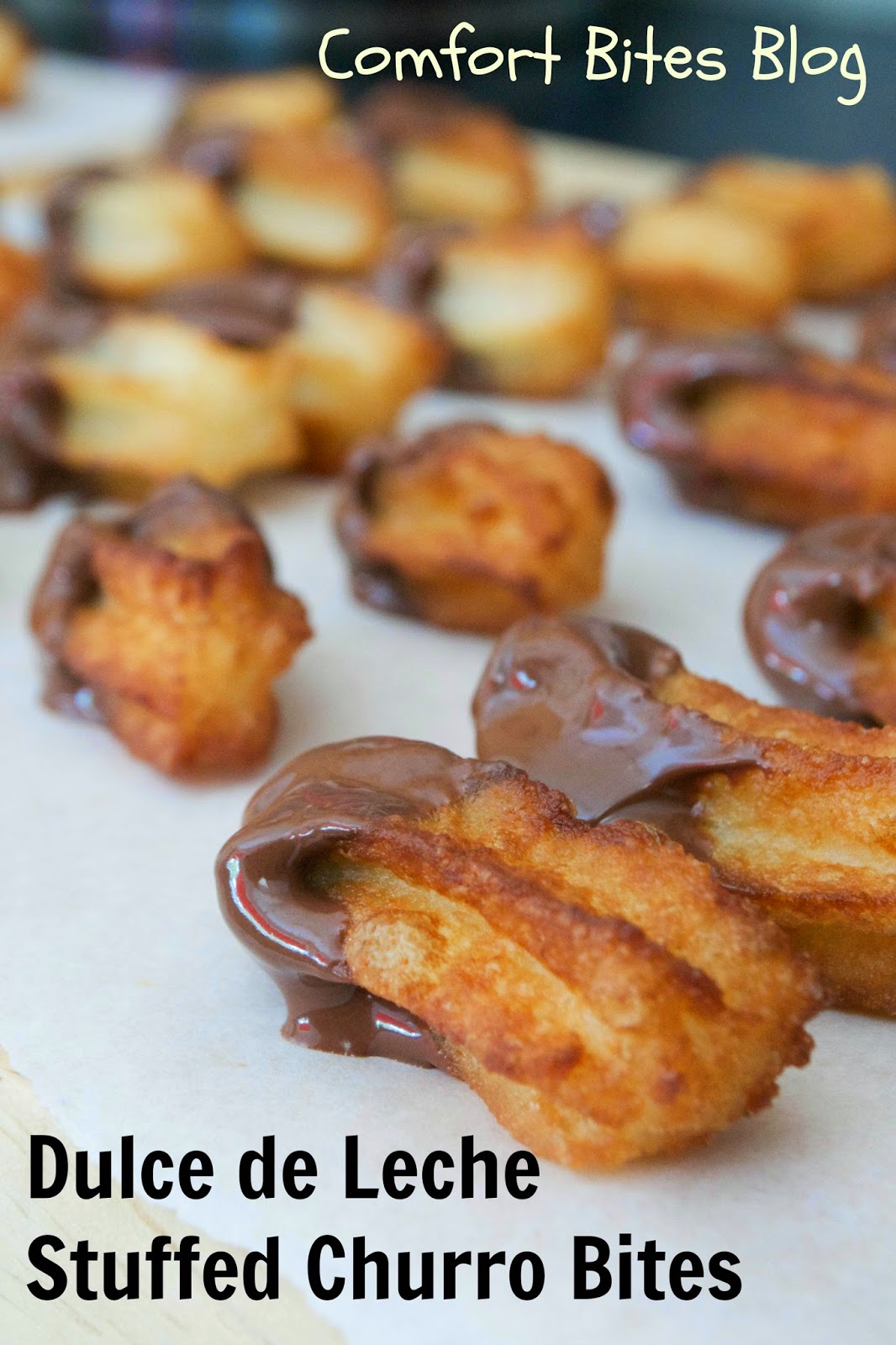 The recipe for the actual churro batter comes from Nigella - in her book Kitchen, which was in turn, adapted from a recipe by Thomasina Miers. It's a brilliant, easy recipe. Most churro recipes need you to make a sort of buñuelo mixture by heating up and beating flour, butter, water and eggs - but hers is just a quick whisk in a bowl and then a squeeze out of a piping bag.

Nigella uses a large star-shaped nozzle for hers, I've used a Wilton 1M piping nozzle, that I use for piping swirls onto cupcakes. It's intentional: I wanted the churros to be 'one-bite-wonders, rather than the long, ridged spindly ones that are more traditional. Also, that way you get a good filling of dulce de leche. And don't worry about how you get the dulce de leche into the churros. It's easy.

You could dip the churro bites into dark or milk chocolate if you prefer - I like to use a mixture of both. 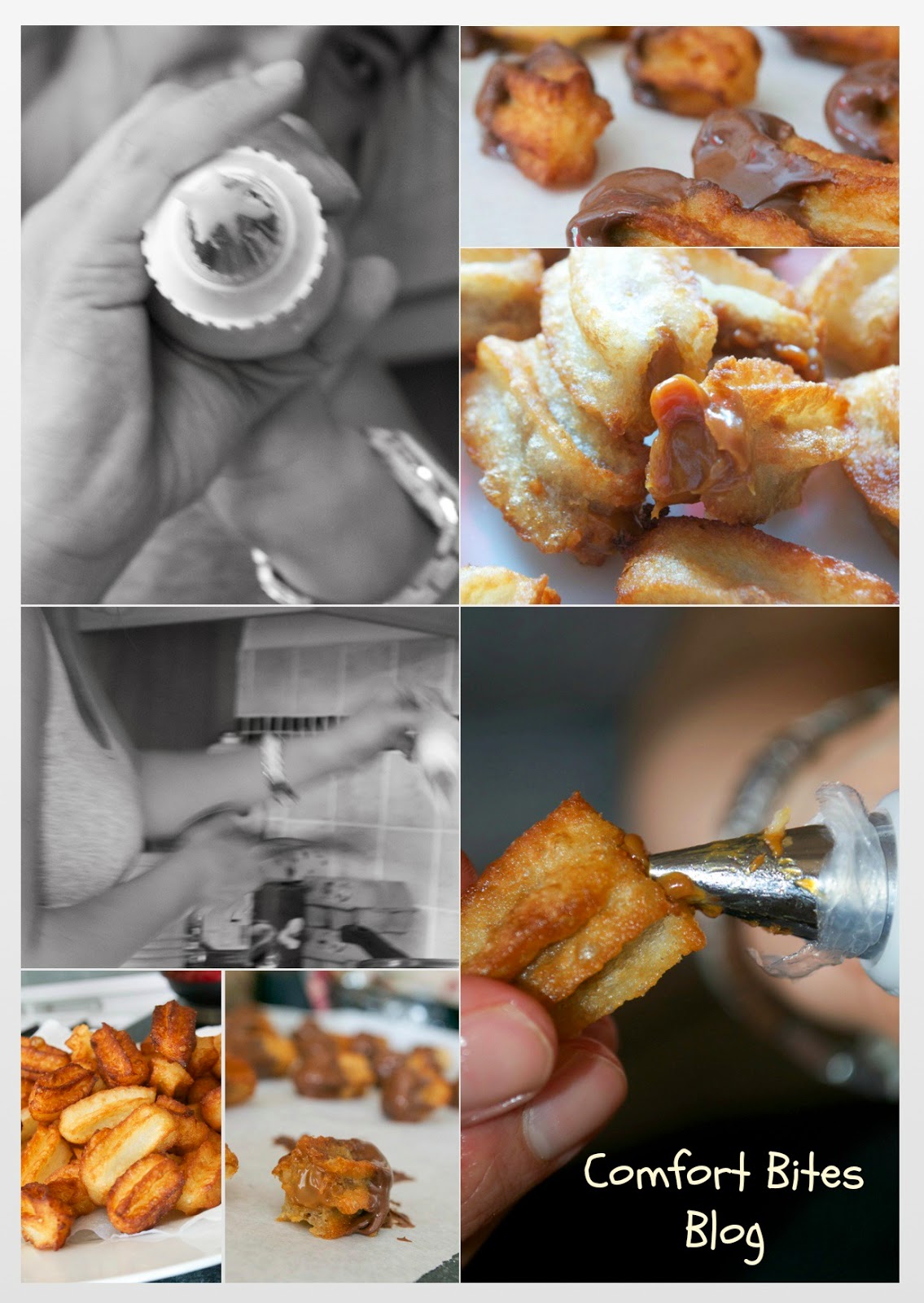 Method
Make up the churro mixture as per Nigella's instructions, leaving out the bit where you mix the cinnamon and sugar together - you won't need it. Scrape the thick dough into a piping bag fitted with a Wilton 1M nozzle - a large, star-shaped nozzle you might usually use for icing your cupcakes.

Fill a smallish saucepan with the deep-frying oil, so it comes up to about two-thirds up the sides. Heat it up to 170ºC, or until a little dollop of batter sizzles and turns golden. Dangle the piping bag carefully over the saucepan and squeeze and then snip little 'bites' off and into the oil. Aim for them to be about 2cm in length. Drop them in fairly close to the pan so they don't splash. The oil will be very hot. Cook them in batches of about 5-6.

As they turn crisp and golden in the oil - they'll take just a couple of minutes - fish them out with a slotted spoon and onto a waiting plate lined with kitchen paper, to soak up any excess oil. Let them cool, and once they're all done, turn off the heat under the oil.

Next, once the churro bites are cooled, get a skewer and make a little hole at one end of each churro bite - wiggling it around so you have somewhere to squeeze the dulce de leche into. Don't push all the way through, just about two-thirds of the way in. Scrape the dulce de leche into a second piping bag fitted with a small nozzle - the kind you might write names on birthday cakes with. Twist the top, and then pipe dulce de leche into the hole you made with the skewer, pulling it out slowly as you squeeze. Arrange on a plate.

Finally, melt the two types of chocolate together, either slowly in a microwave or over a pan of simmering water, and then dip the churro bites in, so the chocolate comes up just about half-way. Place on greaseproof paper to dry. Serve when the chocolate is set.

The churros are best eaten on the day they're made - if you try and store them in the fridge for the next day, they'll go soggy.

Notes: You can also buy chocolate dulce de leche - if you can get hold of this, just stuff them with this and skip the chocolate coating. Or, after stuffing, you could just roll them in cinnamon sugar.