There's a bit of a 'thing' about cuts of meat like oxtail and beef cheeks. They're very trendy at the moment and we all know we should eat them but you don't often see people queuing up for them at the butcher, and they're not widely available in supermarkets.

But they're very cheap cuts of meat, containing important nutrients like collagen and they're also full of flavour. And because they're quite tough, they do need long, slow cooking before they turn meltingly tender and soft.

I've left the dousing of flour out in this recipe, to make it suitable for people eating gluten-free. But if you want a thicker sauce (and if you can eat gluten), coat the beef chunks in a tablespoon or so of seasoned plain flour before browning in the pan. Because I've not added any extra stock, the vegetables and the meat make their own juices and provide the sauce, along with the port which adds richness. If using flour, you might want to add a little beef stock.

Just one more note - although alcohol isn't allowed on the auto immune protocol, it's generally accepted that it's ok to cook with it. 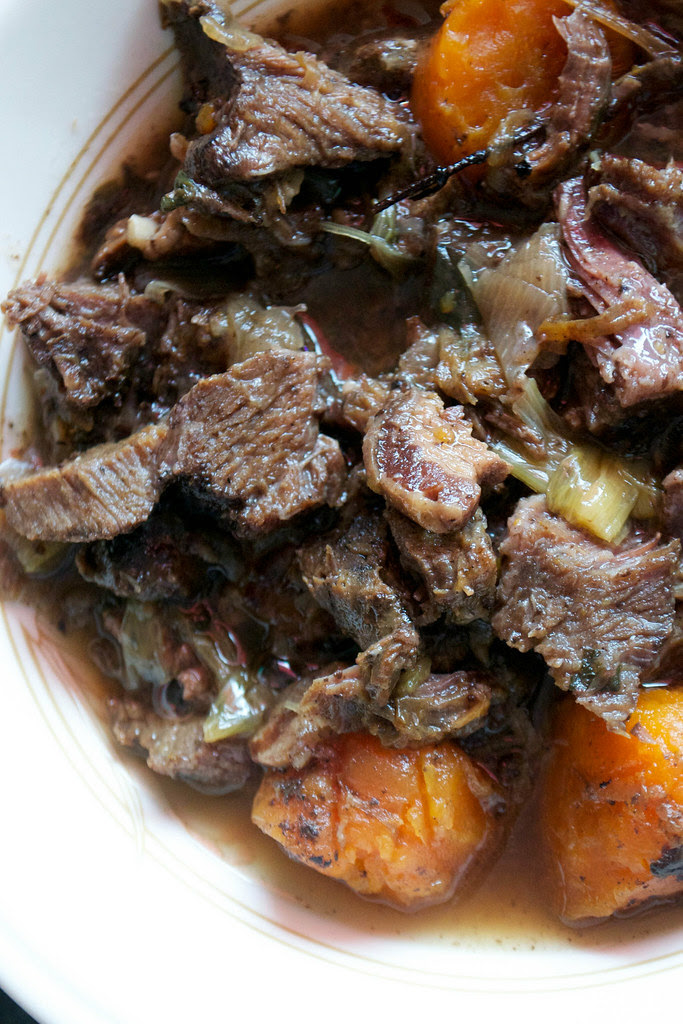 Method
Melt the duck fat in a large frying pan and fry the garlic, onion, bacon, leek and carrots until the onions have begun to soften. Scrape half of the veg into the bottom of the slow cooker's crockpot and the rest into a bowl. Add a little more fat to the pan if you need it, and brown the beef cheeks for just a few minutes. Tip this into the crockpot on top of the vegetables and then scrape the reserved vegetables over the top. Add a splash of port to the pan and increase the heat, using a wooden or silicone spoon to de-glaze the pan. Tip this over the beef in the slow-cooker, along with the thyme and add a pinch of salt. Replace the lid and leave on high for 4-6 hours, or until the beef cheeks are meltingly tender.