Oh for the Love of Provoleta

For ages, I thought that Provoleta was just Provolone marinated in herbs and then grilled. And then I found out I'd got it completely wrong. Provoleta is actually a trademarked cheese, which derives from Provolone, but something happens in the manufacturing process to make it tougher and more at home on the smoking hot grill. 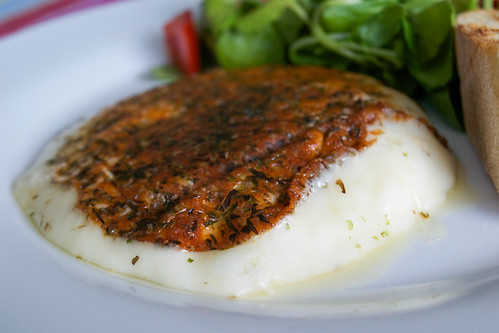 My sister-in-law cooked us Provoleta in Argentina and it was delicious.

It's served as a starter in Argentina, often before they get going on the meat-laden asado - with bread alongside or sometimes it's grilled on top of bread, like a more glamorous cheese on toast. It's sliced and then sprinkled with oregano and sometimes a mild chilli powder or chilli/red pepper flakes. And once it's set down in front of you, you'd better crack on, because it's just not the same when it's cooled. It starts to go from stringy and soft to rubber-like in just 30 seconds after serving.

The herbed cheese is griddled or barbecued straight on the bars of the grill for just a couple of minutes each side (rub with oil so it doesn't stick though), which gives it a dark, chewy crust while it stays creamy and soft on the inside. You don't want to overdo it, or you'll end up with cheese spilling out everywhere, and through the bars of your grill, too. Flip it when the underside has just browned and you won't go far wrong.

Great served with a salad dressed sharply with balsamic vinegar and extra virgin olive oil, and some crusty bread. If you're after some, I get mine online, from Pampas Plains.