A few weeks ago, we tried the tuna spaghetti dish in Nigellissima, but no one in our family liked it. My usually tuna-loving 8-year old left most of hers, saying it was 'too spicy', while my husband reluctantly ate it and said it was just 'OK'. The 5-year old refused to eat any at all.

Being drawn to the recipe for its handy cheapness (tinned tuna, lemon, dried pasta) I couldn't let it go. So, after a few attempts I made this one, which finally got the family's seal of approval. I've taken out the garlic, chilli and spring onions - they were just too punchy for the children, mixed in raw. The lemon and tuna is a great combination, and I know cheese and fish is a bit of a faux pas but the Pecorino works so well, giving a slight creaminess to the flavour of the dish. (I don't adhere to that fish and cheese rule anyway, as a long-time fan of tuna and cheese toasted sandwiches).

Anyway, as long as you have pasta and tinned tuna in the cupboard, a lemon in the fruit bowl and some olive oil on the side, you'll be able to make this - it's a much softer version of the original Nigella recipe - just be sure to grind in some black pepper or toss in some rocket leaves as per the original, if you like. 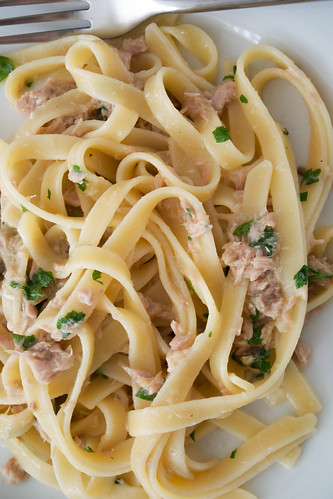 Method
Bring a pan of slightly salted water to the boil and cook the pasta until just cooked.
While the pasta's cooking, drain the tuna and tip it into a large bowl. Drizzle in the olive oil and add the lemon juice, parsley, Pecorino and olive oil. Season well with black pepper (don't worry about salt - the pasta water and Pecorino will be salty enough).

Once the pasta is cooked, remove it with tongs into the waiting tuna mixture, letting the starchy water that clings to it follow too. Toss together, adding a little more pasta water if you want a looser 'sauce'. Serve hot, with extra Pecorino grated over the top, if you like.

What are your favourite quick and cheap pasta dishes?