Fans of Arrested Development, I hear you. What genius it was to stick a lollipop stick into a peeled banana, freeze and then dress it with toppings such as chocolate, caramel and sprinkles. Genius and cheap, too.

I recently wrote a piece for Yahoo! on Summer Baking Tips and got to ask Bea Vo, of Beas of Bloomsbury which summer baking recipes she would recommend. And she talked about frozen bananas, which were made famous by the show Arrested Development. I haven't been able to forget about them since. 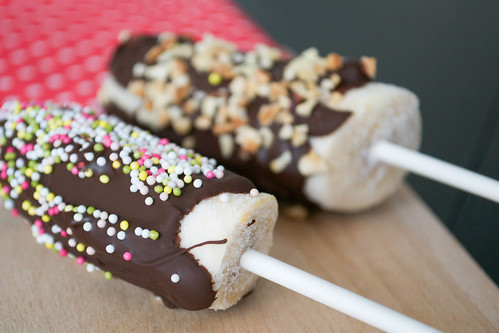 Gluten-free (depending on your toppings), dairy-free (use dairy-free chocolate if you need to) and low fat (again, skip the cream) they're much healthier than a sugar-laden frozen bought lolly and kids love them too.  I find it easier to cut a banana in half than try and thread a stiff lolly stick through the whole length of a curving banana, which can cause them to split. Here's how to make them:

Peel a couple of bananas and cut them in half. Carefully stick a lollipop or cake pop stick through the centre of the banana, being careful that the stick doesn't come out half way through the banana. Put the banana halves (with their sticks in) in a ziplock freezer bag, laying them flat so they're separate and freeze until completely frozen (it's a good idea to freeze them overnight or first thing in the morning for lunch or dinner later that day).

Once the banana halves are frozen solid, melt half a bar (about 50g) chocolate in a bowl, either over a saucepan of simmering water or in the microwave.

Pick up the banana by the stick and drizzle the chocolate over it, spreading it all over. Work quickly, as the cold temperature will immediately set the chocolate. Again, very quickly, sprinkle with some toppings such as baking sprinkles, chopped nuts, grated chocolate or freeze-dried raspberry pieces. Hand out and eat like a lolly. This is also perfect for kids to make themselves - just make sure they sprinkle the chocolate-coated bananas really quickly or the sprinkles won't stick before the chocolate sets.