A week ago, I was sitting at my desk, wearing my winter socks. It's July. The wind was blowing the trees around, and the sky loomed a murky, muddy grey. And, although the weather's perked up for the moment, on slightly cooler (or wetter) summer days you need something a bit more than a salad to keep those spirits lifted. And this is what I'm talking about. It's an Argentinian dish of breaded chicken breast, served in a creamy mushroom sauce. The recipe is adapted from one by one of my newest comfort food heroes, Doña Petrona, the Argentinian TV cook. 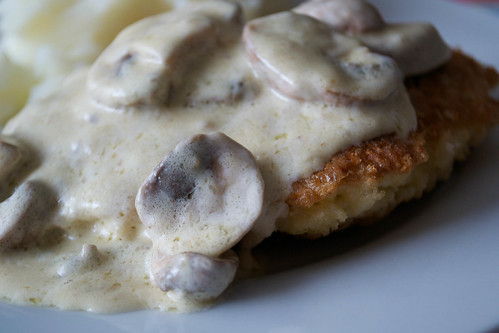 I've changed the quantities of butter and cream - her recipe is generous with both, so I've reined it in a little; but only a little. Adding lemon juice to the mushrooms is a genius touch - as well as flavouring the mushrooms it also lifts the rich sauce later on.

Speaking of the sauce, it can be served, in summer, as an optional extra. Those who want a duvet of cream and mushroom billowing out over their chicken can have one, while the others can have the milanesa plain, alongside cooked peas or a dressed salad. It's one of our favourite dishes now - real, Argentinian comfort food.

Method
Cut the chicken breasts in half. Lay each one between two sheets of cling film and bash it - gently though - with a rolling pin until it's pretty much flattened. Once all the chicken has been flattened, dip in the flour, then the beaten egg and finally in the breadcrumbs. Set to one side, while you prepare the sauce.

Slice  - or quarter - the chestnut mushrooms (your choice) and tip them in a bowl, along with the juice from the lemon. Give them a stir and leave for 5 minutes. Next, melt the butter in a small frying pan and tip in the lemony mushrooms. Fry gently for about 5 minutes, or until softened. Add the flour and stir well. Season with a pinch of salt and black pepper and then stir in the double cream, mixing well on the heat to form a thickened, creamy sauce. Taste, and add a pinch of sugar to sweeten, stirring again, and adding more salt and pepper if you think it needs it.

Turn the heat down on the sauce and let it just keep warm while you cook the chicken. Heat a little olive oil in a frying pan and fry the milanesas on a medium heat, for about 4 minutes per side, until cooked in the middle. Serve the milanesas on a plate, with the sauce spooned over the top.