After the recent round of birthday parties, my girls have developed a bit of a thing for chicken nuggets. But instead of buying the frozen ones, I whip them up a batch of these. They're coated in seasoned Panko breadcrumbs, which give them a spiky, crunchy texture - and are made with free-range chicken breasts. Very simple to put together on a weekend, or a busy weeknight - just make a few of these up and serve with some coleslaw, baked beans and potato salad. They're also lovely with barbecue sauce or ketchup to dip them into. Much nicer than the processed versions and you can control salt, types of chicken, etc that goes into them. Boo-yah! (As my eight-year old would say). 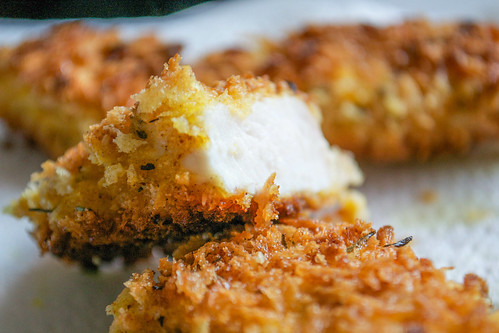 Method
Tip the breadcrumbs into a shallow bowl and stir in the celery salt, smoked paprika, turmeric and thyme. Season with a little salt and some black pepper. Crack the egg into another shallow bowl and slice the chicken breasts up into strips, then cut them so they're about the length of your forefinger. Measure out the flour into a third bowl.

Drizzle the olive oil (about 3 tbsp) into a non-stick frying pan on a medium heat. Dip the chicken into the flour and then into the beaten egg and finally into the seasoned breadcrumbs. Press the chicken down into the breadcrumbs so they're evenly coated and then fry gently in the oil for about 3 minutes per side. Transfer to a plate lined with kitchen paper to absorb the extra oil and repeat with the rest of the chicken, cooking in batches. Don't overcrowd the pan or you'll end up steaming the chicken rather than frying it so it's crisp. These are great served with coleslaw, potato salad and baked beans or a home-made tomato sauce and some chips.