Empanadas are a bit like small pasties. They were laid out at just about every gathering while I was in Argentina, usually stuffed with minced beef (empanadas de carne) or cheese and ham (empanadas de jamón y queso). We visited a friend, Marcello, who owns a fishmonger's in El Palomar, Buenos Aires - and, while there was an abundance of fresh fish on the counter, there were also pastries stuffed with fish or veggies. One of these was empanadas de pollo de mar. Pollo de mar (translated as chicken of the sea) is a fish with a pointy face that's local to Argentina. Depending on who you talk to, the fish gets its name either from it's beak-like appearance or from the fact it doesn't taste overly 'fishy' so can be used instead of chicken in recipes. Anyway, it was served in these empanadas with green olives and onion and it was completely delicious. And so began my love for fish in pastry. 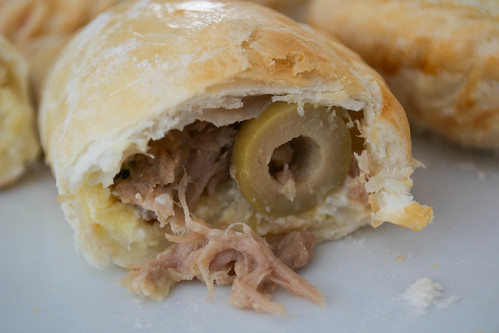 You can buy the empanada wraps online (I use the Fargo brand) from Tom Hixson. They come frozen, so just defrost them fully in the fridge before using. Each pack contains 12-14 empanada wraps, which seems like a lot, but the empanadas are actually quite small so they will get eaten. I loved these warm, although they're great cold and tucked into lunch boxes instead of sandwiches or grabbing on the go. Don't be tempted to use shortcrust pastry or puff pastry for these, you really need the empanada pastry for best results, as it's thinner, flaky and more elastic than other pastries we commonly use in the UK. Oh, and as with pastry in general, it's less easy to work with once it warms up, so get on with filling your empanada wraps straight from the fridge. 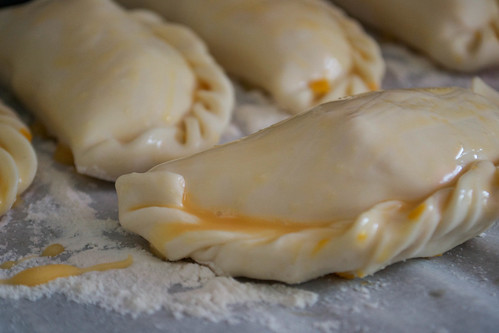 Method
Gently fry the chopped onion, with a pinch of salt, in the tablespoon of butter until softened. You don't want any colour on the onion, just let it turn translucent. Sprinkle in the flour and stir with the onions for about 30 seconds. Gradually pour in the milk and stir well, so that it forms a creamy sauce. Take off the heat and quickly stir in the egg yolk to add richness to the sauce and thicken it. Stir well, and set to one side to cool slightly.

Next, fill the empanadas. Take one disc of pastry in your hand and dip your finger in the beaten egg. Run it along one half of the edge of the pastry. Now add a teaspoonful of the onion sauce to the centre of the disc and crumble in some tuna on top. Add in two olive halves and fold the empanada wrap over, pressing the edges together to seal, so you have a half-moon shape. Press the edges well, so you have a flap around the outside edge. Now you can crimp the pastry, folding it back on itself until the empanada is sealed.

Repeat with the rest of the empanadas and lay out on a sheet lined with greaseproof paper. Brush with the beaten egg and milk mixture and bake for 15 minutes at 200ºC. 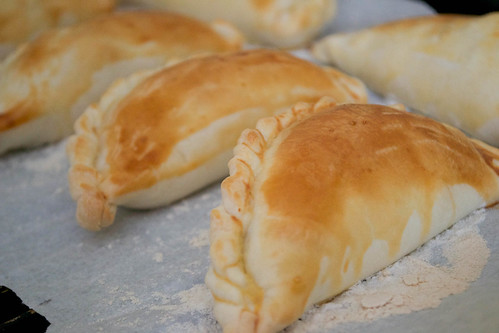