When I left Argentina, I was given a cookbook by my family, so I could recreate some of the authentic dishes I'd eaten there once I'd got home. The author was Doña Petrona, who is the Argentine equivalent of a kind of cross between our Mrs Beeton and Delia Smith.

She appeared on telly in the 1960s, and released a definitive collection of her recipes called El Libro de Doña Petrona. Her book became the one people turned to for authentic, tried and tested Argentine cuisine and many Argentine households have a copy not too far from the kitchen. And flicking through the book, on the plane home somewhere above Brazil, I found a recipe for ricotta ice cream; what she called helados rápidos con ricotta ('quick ricotta ice cream'). I couldn't wait to try it out. 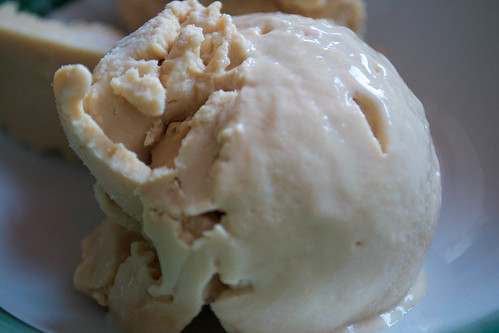 The measurements in Doña Petrona's book are slightly vague. Along with the specified 500g ricotta she calls for 'a pot' each of yoghurt and dulce de leche. So I added the quantities slowly, until it formed the right consistency, and came up with this: a rich, thick and creamy ice cream with the unmistakable flavour of caramel. If you can get real, dark, dulce de leche (lucky you) then do use that instead.

Ricotta and Caramel Ice Cream
(adapted from a recipe by Doña Petrona, in El Gran Libro de Doña Petrona)
Ingredients
500g ricotta
200g Greek natural yoghurt
397g can of caramel (I used Carnation caramel) or use dulce de leche if you can get it
half a teaspoon sea salt flakes, plus more to serve, if you like

Method
Empty the ricotta into a large bowl and beat until all the clumps have gone, leaving a smooth, white mixture. Tip in the yoghurt and then beat again, ensuring there are no lumps and the yoghurt is mixed smoothly with the ricotta. Finally, pour in the caramel or dulce de leche and the salt and mix again until well combined.

You can either pour this into the frozen bowl of an ice cream maker to churn, but you can also just empty into a freezable container and freeze until it's the right consistency. You can also sprinkle the ice cream with a few sea salt flakes to make the salty sweetness just that little bit more intense.

Do you fancy trying ice creams made with ricotta? What do you think?