Ah, Mother's Day. It's always good to treat your Mum, and you can start with breakfast in bed. And not just any breakfast, but something unusual, fragrant, sweet and colourful. Like these heart-shaped crumpets with a squishy raspberry and vanilla butter to melt on top.

You can buy these crumpets in Asda stores in the run up to Mothering Sunday - they're quite big, but I can't work out whether it's a regular-sized crumpet formed into a different shape or if they're just actually bigger. If you're making the raspberry and vanilla butter using fresh raspberries, then you can also freeze it. Chill and then slice up (it will probably crumble a bit but that's ok) and freeze wrapped in cling film. 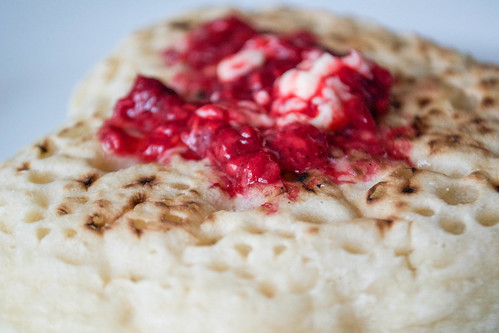 Raspberry and Vanilla Butter with Heart-Shaped Crumpets
Makes about 8 servings
Ingredients
40g raspberries (fresh of frozen, but use fresh if you're planning to freeze the butter)
70g unsalted butter, softened
half a teaspoon of vanilla bean paste

Method
Lay out a square of cling film, about 35-40cm wide. Put the butter on the cling film. Chop up the raspberries and add these to the butter, along with the vanilla bean paste. Using the edges of the cling film square, push the butter and mash the ingredients together, until you get a pink butter, speckled with  black vanilla seeds but it will be a little lumpy. Roll up in the cling film and leave in the fridge to firm up.

When you're ready, toast a couple of crumpets and, while hot, top with a slice of the raspberry and vanilla butter. For a little extra sweetness, you can also drizzle with a little honey or agave syrup. 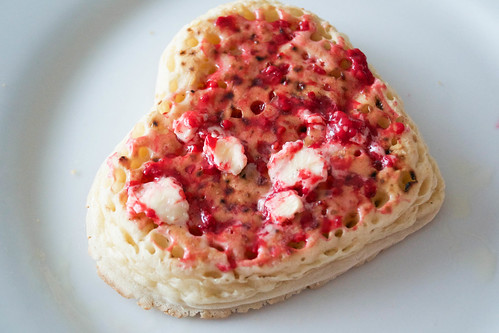