Crunchy Roast Potatoes - The Way I Do Them

With some roast dinners, I admit, you don't want roasties. Mashed potato seems to go so well with a slab of pork belly, and sliced, seasoned potatoes with a lamb shoulder - cooked so that the fat drips from the meat and onto the potatoes beneath. But there are times that you need to be able to whip up a good batch of roast potatoes.

Over the years, I've eaten countless Sunday lunches at pubs and restaurants and found that so often the roast potatoes really disappointed me. I've had some that are pale, tough and look like they've been just dipped in the hot oil before being chucked on the plate. I've had others that are dark, very hard and when you cut them you're left with a dry, almost hollow potato within. I think that a roast potato can easily make or break your roast dinner. 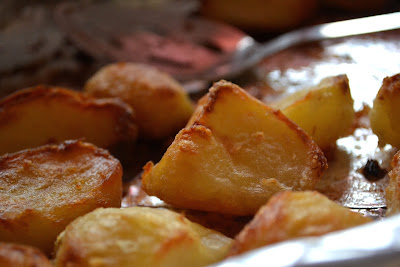 I've seen people sprinkling potatoes with semolina, flour or some other starchy powder to guarantee the potato's crunch. But I've found that you don't need to do that - not if you use the right potato, fat and cooking temperature. And I've made them often enough now that they always turn out like this: golden, crunchy and meltingly soft and white in the centre. So I'm going to share with you my advice on how how you can do it, too.

The Potato
It's essential to choose a creamy potato for your roasties. Maris Piper is a good all-rounder but King Edwards are generally thought of as (literally) the 'cream of the crop' for making great roast potatoes. Look out for other varieties too. A special red 'Rudolph' variety came out in December 2011 and they produced the creamiest, crispest roast potatoes I've ever made. Ask your greengrocer for their advice before you buy. 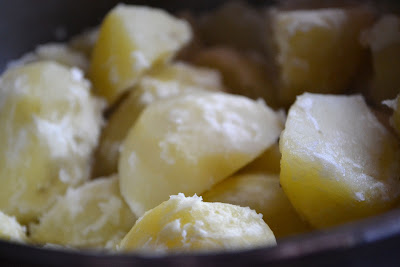 The Cut
Once you've peeled it, don't just cut it any old way. There is a science to cutting a potato that is destined for the roasting tray. Nigella Lawson, in the book Feast, even demonstrates this via a diagram. The best thing to do is cut each largish potato into three pieces. First, cut through about one third of the way in; the next cut should cut the larger piece into two. You want as many pointy edges as possible on each piece. And cut them fairly small. People love small crunchy roast potatoes, much more than big fluffy ones. More crunch ratio, you see.

Parboiling
You'll need to parboil your potatoes before roasting them. For great, crisp roasties add a good pinch of sea salt to your cooking water. I saw Heston Blumenthal do an experiment on TV and the difference between the roasted potatoes that were parboiled in salted water and those in plain water was amazing. So they'll be crisper with a pinch of salt added to the parboiling water. Boil only for around 5-7 minutes - until they are starting to break up a little on the outside.

The Shake and Steam Dry
Drain the potatoes, put them back in the empty pan and clamp on the lid. Give them a shake, to roughen up the edges a little bit, and this will produce those gorgeous crispy morsels that cling to the outsides. After you've shaken them a couple of times, remove the lid and leave the pan to one side to let the steam escape. Leave for about 5 minutes. 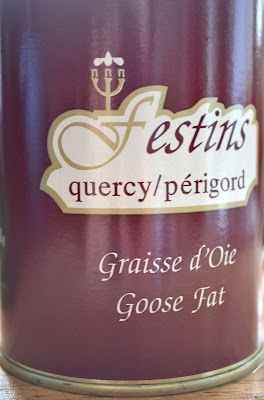 The Fat
I've tried roasting potatoes in olive oil and sunflower oil in the past, but really the perfect roast potato needs a fat that can cope with the scorching heat of the oven and not turn bitter. For me, this means that to roast the perfect potato, you will need some goose fat, although duck fat can also be used. For potatoes to feed around 6, you only need a few tablespoons worth - it's no good tipping the whole tin into your roasting tray. Just turn each potato (with a spoon, they'll still be hot) so that they are coated in the clear, hot fat lining the bottom of the tray. I've seen people roasting potatoes with the fat coming half-way up the roasting tray. We're not deep-frying them. You can always give them a shake or another turn half-way through cooking to coat them again, if you feel you need to.

The Roasting Tray
Choose a large, shallow roasting tray. You'll need the potatoes to be spread out in a single layer; don't try piling them up - it just won't work. High-sided tins seem to trap in any steam, so the potatoes don't turn as crisp.

The Cooking Temperature
You will need your oven turned up to HOT. That's around 220°C. If you're cooking them with some roast meat, take out the meat when it's done and loosely wrap in foil and leave it to rest. Then, crank up the oven and put in your potatoes for roasting. Leave them in there for about 45 minutes. Your roasted joint of meat will stay hot, and will actually be extra juicy to boot after that resting time. Bonus! 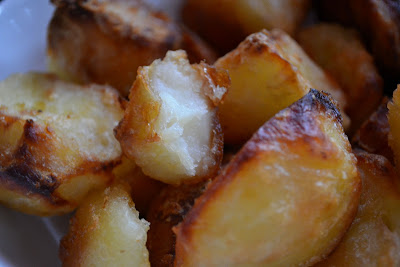 Serving
OK so the potatoes are roasted, golden and crisp. Don't, whatever you do, cover them. The steam from the hot spuds will collect in the top of the lid as water and drip back onto your potatoes, making them soggy. Keep them uncovered, and drain on kitchen paper before sprinkling with a little salt and serving immediately.

Do you have any other tips for making the perfect roast potatoes? Share them below!