This is the English version of French Toast ('pain perdu'), that's supposed to have its origins in using up leftover stale bread, although I often go out and buy thick, sliced white bread specially so I can make this. I'm not sure what it has to do with Windsor, or knights in shining armour come to think of it, but one taste of this and I was hooked. 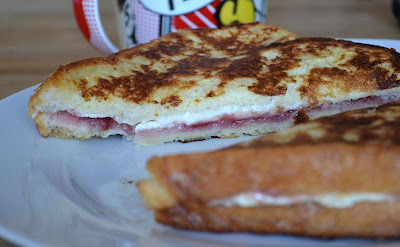 I've made eggy bread plain or with jam in the middle, and also sometimes filled with cheese, but I was drawn to the recipe on the Good Food website, where eggy sandwich is filled with sweetened soft cheese and blackberry compote. I adapted it to make the soft cheese less sweet; a certain sharpness is important here I think, to counter all that sweet jam and vanilla. And as many of us don't normally have a jar of blackberry compote loitering in the cupboards, you can use whatever jam you do have. 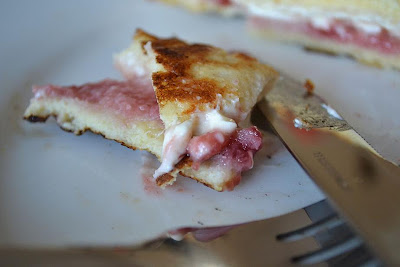 There are recipes involving toast that go back to the seventeenth century at least, and the Poor Knights of Windsor was actually a movement created by King Edward III in the 1300s. While it's romantic to think of ageing knights in their gleaming armour eating this, if we're really honest no one knows where the name came from. One thing's for sure though, there's nothing poor or inadequate about this pudding. I love how the jam ripples with the soft cheese as you eat. And this is the eggy bread version of one of those raspberry splits with synthetic cream. It tastes just like it.


Poor Knights of Windsor
Serves one