I know what you're thinking... "oh, great, she's done a stir fry with llama meat - it's not exactly the sort of thing I can just pop out to the supermarket and pick up." But it's easier to get than you think. Allens of Mayfair deliver it to your home, as well as ostrich, zebra, camel and other exotic meats.


So on to the llama. It arrives in a pack of two fillet steaks. I didn't really know what to do with it, as it was my first time cooking llama, so I decided to treat it much like red meat and go from there. 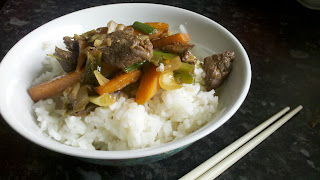 It was a rich, dark, strong-tasting meat, somewhere between beef and lamb - sweeter and richer than beef but more savoury than lamb. As with the other exotic meats I've tried there was no fat on the meat at all, and it wasn't greasy or chewy, just really tender and lean. I absolutely loved it, and the children loved it too.


I cooked the carrots first, because I left them in quite chunky pieces and they take so long to cook. So giving them a quick burst in the pan before everything else gave them a golden colour and meant they weren't still raw at the end. 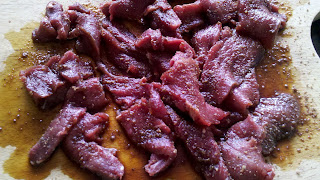 One thing I would say is that I sliced the steaks up into thin pieces, and cooked them just for a couple of minutes in the hot pan. They cook really quickly and you don't want to overcook them - basically get the meat in the wok or frying pan when everything else - your rice, noodles etc - is just about done. The quantities below served us happily, as a family of two adults and two young children with vegetables and rice, and we reckon the strong flavours of the Chinese spices, ginger and soy worked really well with the tasty, dark meat.


If you're thinking of trying llama, have a look at the Allens of Mayfair website, where they can also supply diced llama or llama haunch steaks.