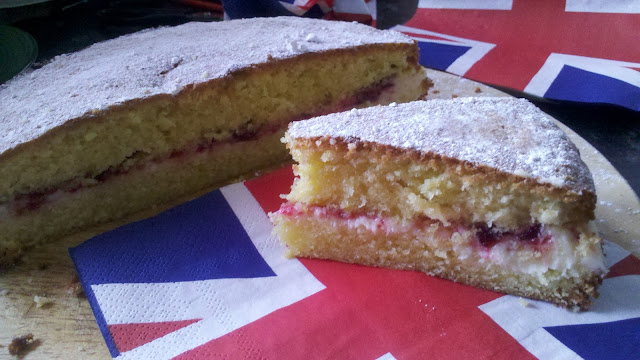 For me, there is no sight (or taste) that is more comforting with a good strong cup of tea than a generous wedge of this eggy, sweet and jammy sponge cake.

Said to be named after Queen Victoria in the nineteenth century because she was partial to a slice of it with her afternoon tea, the Victoria sponge has subsequently become a symbol of 'Britishness'. Afternoon tea, parties, special occasions or just something to bake when it's raining you can't go far wrong with it.

There were no street parties near us for the Royal Wedding between Prince William and Catherine Middleton and so I decided to mark the occasion by forcing the children to watch it all on TV (for historic prosperity, whilst boring them all with the tale of when I met Kate Middleton's mum) ... and bake this cake.


I have no idea where I got this recipe - it is scrawled in one of my notebooks from years ago - but I've relied on it over and over again and it's my favourite. It contains four eggs, resulting in a rich, yellow-coloured cake and makes use of both jam and buttercream icing. I understand that the cake Queen Victoria used to enjoy was sandwiched only with jam - the buttercream was a later, twentieth-century addition.

So here it is - a right royal Victoria Sponge. And what better way to celebrate the royal wedding - and all that celeb-spotting - than with a fat wedge of this and a good cup of tea. Preferably served by one's Butler.

Ingredients
Method
This recipe was previously published on Suite101 for an article I wrote for them on How to Make a Classic Victoria Sponge Cake  in 2010.
Email Post
Labels: baking sweet