Halloween is brilliant - it's an excuse to go mad with the way food is decorated and the ingredients used. I present my Halloween Spiderweb Soup and Spooky Cupcakes - they both went down a treat - or was that a trick?! (mwah hahahahahaaaa!!)

The Spiderweb Slime Soup is just pea soup, with a spiral drizzled in using double cream. The spiral is then dragged out from the centre using the point of a knife or skewer to make the lovely cobweb design.

The problem I have with Halloween and the children is that before they go off to party and get full up on sweets and crisps I really want them to eat something healthy in the day. We ate this for an early dinner before they went out and all loved it. 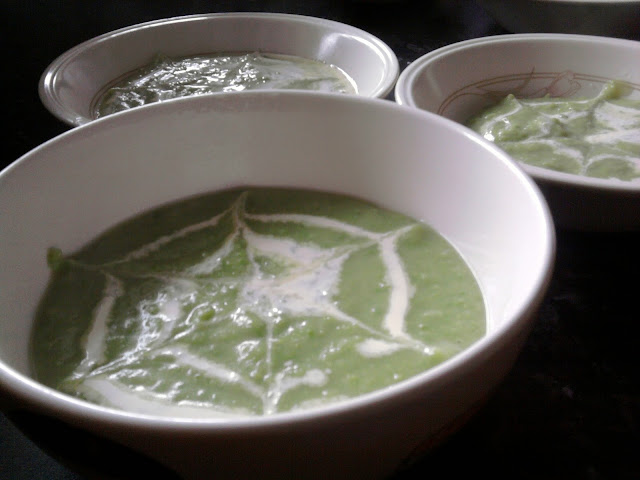 Method:
Just the thing for providing warmth and sustenance after a night's trick or treating!!

The Spooky Cupcakes were a chance for me to get out my edible glitters, Halloween sweets and food colouring (just a drop, mind - the children were already bouncing off the walls after all those Halloween sweets!). 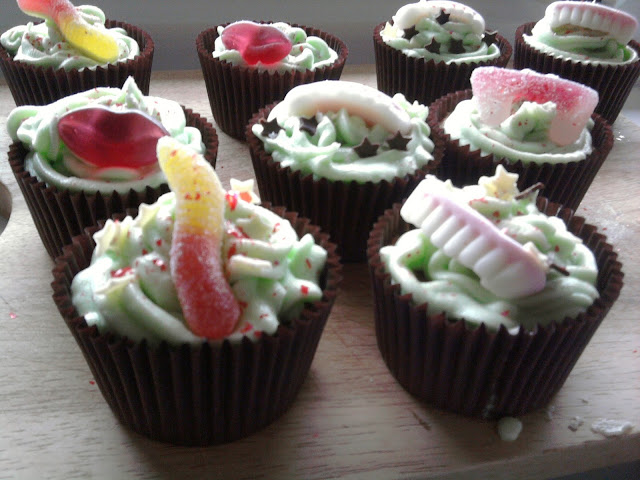 I used Nigella's absolutely fab cupcake recipe which is what I always use for making cakes for the school fairs or for parties. They are light, soft and vanilla-flavoured - lush. When they were cool, I then mixed up some pale green buttercream icing using the formula in Kate Shirazi's Cupcake Magic book: 225g sifted icing sugar, 100g soft unsalted butter and half a teaspoon vanilla essence. The addition of a few drops of boiling water from the kettle softened the mixture and then a few drops of green food colouring made it all turn a delicate but still un-nerving pale green.

After piping the icing on the cakes, I then set to work adorning and embellishing with worm, teeth, lips and fang sweets - the teeth were my favourite. A sprinkle of red edible glitter here and there and some chocolate stars and I was done. The children were happy to have some home-made Halloween fare and I was happy to indulge myself in a spot of Halloween kitchen-tinkering. Just wait until Christmas.

Check out the books I used here on Amazon: (affiliate links):