Every Moment Is Enormous - From the Book Love Life, Stress Less

This is a chapter from my book Love Life, Stress Less. It's a fun (and hopefully, at times, funny) little book full of little bite-sized pep talks to inspire, empower and maybe help you out of a worry or an anxiety you might have. I hope you love it.

You can find Love Life, Stress Less on Amazon.

Every Moment is Enormous

It might not seem like it, but every single moment is a miracle in itself. It’s a one-off, precious collection of people and objects that depended on a series of circumstances that flung people together at this exact moment.

Let me back up a bit. Things might get deep and a little bit trippy.

I was sitting in a classical music concert with my family on a November Sunday afternoon, listening to the rich, woody cellos, the balmy flutes and the whistling violins as they played Bruch’s Violin Concerto. And it suddenly occurred to me that, for this moment to exist at all, so many things had to happen, over hundreds - even thousands - of years that led to this point.

This was much more than just us sitting at a concert. This was huge.

Bear with me. You might want to grab a cuppa and settle down.

Sometime in 1866, the composer Max Bruch put his pen down with a clatter on his desk, after writing his Violin Concerto. This is no easy feat to start with - the genius of writing down music that was in his head and translating it - and all the different instrumental parts - into dots and dashes on a stave. The work. Imagining the music, the time at his desk, collaborating with others perhaps, listening to the result, tweaking and finalising it at the end. He could have given up. But he didn’t.

Around a hundred or so years later, a number of babies were born, that were to eventually be the people we watched on the stage that night. At some point, perhaps as children, or adults - it’s not important exactly when - they became drawn to a musical instrument. No doubt their parents took them to their cello lessons or tutted with every early squeak from a tiny violin string coming from their bedrooms after tea time.

And then these people came together, probably from different towns and cities. They became members of the local orchestra. They decided they would play a concert with a world-famous violinist. Rehearsals, missed family dinners, putting their black suits on and heading out the door on that frosty night, to perform for us. Getting the violinist to find some time in his hectic diary - he’d been performing in London recently, Germany before that, and the US before that. This violinist travelled the world. But he was there - intimately - in that room with us that evening, in my local town hall.

And it was, as I sat transfixed at the entire orchestra, the glint of the stage lights as they reflected off the golden decorations and chandeliers in the hall, the fluid movements of the violinists’ arms, and the notes of the concerto itself that I realised that it was a miracle this event even existed. Everything starts with an idea. Bruch’s idea to write a violin concerto, almost 200 years ago. Each member of the orchestra’s idea that they would quite like to take up learning a musical instrument. The organisation of the orchestra. The conductor. The hall that we were sitting in being built. The person that screwed those glittery chandeliers into place 100 years ago. It was as if this whole experience had been laid out for us for more than a hundred years and I was so grateful for it. I just basked in this thought for a while, feeling the vibration of the instruments through me as they played.

My eyes flicked, involuntarily, to the left. In my peripheral vision, I saw a blue glow, coming from a mobile phone held by a person in the row behind me. He was swiping in the darkness - checking emails, searching for holidays - I don’t know what. I heard his wife hiss at him, whispering for him to turn it off, as their faces were conspicuously lit up by his backlit screen. He just sat up straighter, defiantly continuing to scroll through his screen. The electronic (and loud) ‘blee-bloop’ of a notification was the only thing that made him quickly snap the case shut, as the audience around him swung their heads around to stare.

To be honest, I think he missed out.

Recognising the enormity of the moment not only gives a huge respect and gratitude to the people who are there to share it with you, but recognises the fact that this moment might not ever have existed at all. And you are witnessing something magical and exclusive. What if Bruch had given up writing the concerto? What if the manuscript had been lost over the last 150-odd years? What if this famous violinist that stood in front of me had decided to take up a different career path and not head for music?

And it’s not just bigger things, like concerts, that are important. Tea with friends. Bumping into a neighbour in town and having a gossip over coffee. The day you accidentally caught an earlier ferry than you should have and found your old schoolfriend from years ago on the other side of the water, waiting for the same ferry to take her home from work.

Turn off your phone. Close your eyes and listen to the orchestra. Open your eyes and see the passion and concentration in the eyes of the musicians. Gaze up at the squirrel nibbling on an acorn on that tree branch, or a cloud formation that right this second looks like a dog. Immerse yourself in the moment. Every moment.

Because, very nearly, it might not have ever happened for you to see it.

And how magical is that?

You can find Love Life, Stress Less over on Amazon, in paperback and Kindle ebook. 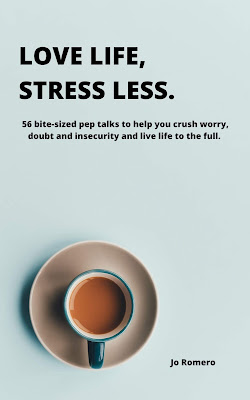 Want to read some more free chapters? Here you go...

You Are Amazing, Seriously
Recognise That Life is a Journey