Just to let you know: I've reintroduced some grains, which aren't strictly paleo. This post includes grains, and also legumes.

A look at four sausages in the MOR sausage range. I received the sausages to try for this review, and all opinions are my own and are completely honest.

I love sausages. I always have. They're my weakness.

No Full English Breakfast is complete without them - and I love them as well, all crisp and golden, in a puddle of gravy alongside mashed veggies and onions. Beautiful.

And when I was approached by MOR and asked if I'd like to try some of their range, obviously I said yes. Obviously.

They're not strictly paleo, due to things like rice flour, chickpeas and lentils in them, but they are gluten free and healthy, and they're not your ordinary sausages.

I was sent the Moroccan Spiced Pork, Cauliflower and Chickpea; the Chicken, Sundried Tomato and Basil; the Pork, Beetroot and Bramley Apple and the Pork, Super Green Veg and Lentil varieties.

I decided to cook a couple of the flavours to start off - and share with the family at breakfast the next day, alongside poached eggs and some stir-fried green veggies. The Chicken, Sundried Tomato and Basil were the first to get gobbled up - they were clearly the favourite, with a hint of sweet spice and a well-rounded, sweet flavour. They were light and as little chipolatas, just the right size for my youngest kids. Bolstered by sweet red pepper, we finished off the couple that were left over in a salad the next day.

But that doesn't mean the Pork, Super Green Veg and Lentil sausages were put to the side. I actually liked these a lot with a runny-yolked egg. You could taste the greens in them, which is why I think they worked so well alongside the egg. They were dense and meaty, and proper 'banger' size - thicker than the chicken chipolatas. And it was great to see my kids tucking into them, because hidden in their crispy casings were green lentils, garden peas, asparagus and spinach. If I was making a sausagey breakfast again I'd definitely get a pack of these to go alongside everything else, just because they were the best with bacon and egg.

The next day, I cooked up the Moroccan Spiced Pork, Cauliflower and Chickpea sausages, alongside the Pork, Beetroot and Bramley Apple sausages.

I loved the Moroccan ones - we ate these in a sausage sandwich inbetween two slices of gluten free bread and lashings of cold butter. There was some spice there, but it wasn't overpowering. The casings didn't come out as crisp and crunchy and were slightly more chewy than the other sausages, which was a bit weird - but it didn't put us off at all. We don't eat much cauliflower at home, so it was good to know we were all secretly eating some cauli in our sausage sandwich - again, I love how there are hidden veggies in these sausages, which ups the nutrition levels.

The Pork, Beetroot and Bramley Apple sausages didn't do it for me. I think it was because I found them a bit too sweet for my preference, and the big chunks of apple were slightly off-putting but that's just personal taste. I did love though that there was beetroot (which wasn't massively obvious to my beetroot-hating kids) and some spinach packed into these bangers.

So. The good points. There are hidden veggies, which increases the nutritional profile of these sausages. I also love that they're gluten free, which gives us GF-ers a bit of choice. The flavours were adventurous, and I'd never eaten a Moroccan spiced sausage before, or one with green lentils in, but I truly loved them. It was good too, to have something other than pork - and the chicken sausage was a bit lighter in texture than the others, as you'd expect. They weren't greasy either - I lifted them out from practically a dry pan from a quick roast in the oven.

Bad points? Apart from the casings seeming a little thicker and less crisp on one of the sausage varieties (this could have been down to the way they were cooked, or just natural variations in the casings) I can't think of any. I'd definitely recommend you to try them if you fancy more adventurous flavours with your bacon and eggs or onions and mash.

Oh, and if you buy the Super Greens ones, poach a runny-yolked egg on the side to dip your banger into. Trust me. 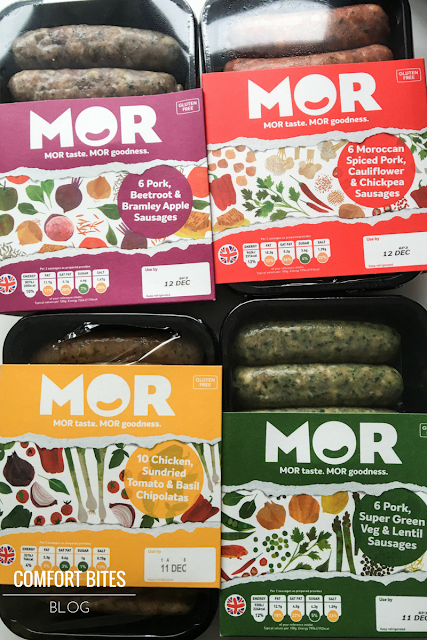 Find out more about MOR sausages at their website.

Thank you to MOR for providing the sausages for the purpose of this review.