A look at the new food diary, created by an IBS sufferer, which helps you to find links between what you eat and your symptoms - whether mental, emotional or physical. Could it help you?

Years ago, when I was itchy with psoriasis and in constant pain and anxiety from IBS symptoms, my doctor suggested I keep a food diary.

But how did I know what I needed to write down? What should a food diary look like? I didn't have a clue. I went out, bought a blank note book and started writing down what I ate in one column and what my symptoms were in another. My food diary went through quite a few changes, though. I added columns, drew more boxes in to record other things. I'd end up writing things in the margin and drawing arrows to help me remember what it was about.

It was a bit of a faff until I got it settled. And even then I wasn't sure if I was doing it right.

And then I heard about The Food Diary Co. 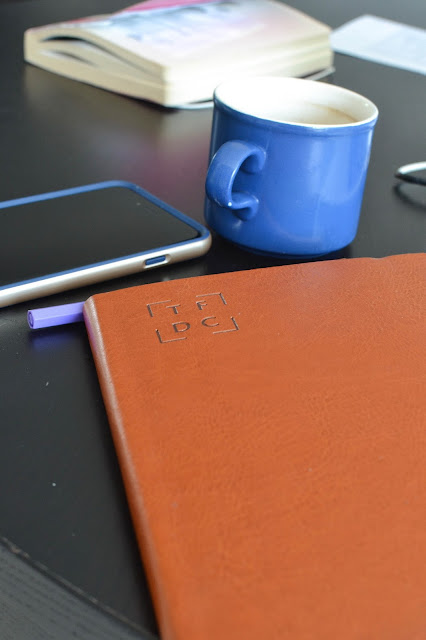 The diary was created by an IBS sufferer, who got fed up with drawing out the columns in a book every day (like I did) and made something that all of us can use, regardless of the reason why you're tracking your food in the first place. It's a good idea for those following a low FODMAP diet, or just for people looking for links between their food and symptoms - trying to track down any intolerances. I was using mine to track for IBS as well as psoriasis, and the results actually become quite clear.  It also gives you something physical to let your doctor flip through once you have an idea what might be aggravating your symptoms.

The Food Diary Co sent me my own diary to track my food and symptoms for a few months. I had been suffering with some reflux (which was rare for me) but, using the diary, I found the culprit: a birthday present of raw chocolate which I'd made last over the course of a week. Plus a LOT of black tea. Sad but true. Turns out I couldn't handle all that chocolatey goodness every day, after all.

I love that the diary comes in a tan cover. It looks subtle, and professional, so you haven't got to worry about people finding out about why you're tracking your food and asking questions about it. It doesn't have "FOOD DIARY" screaming out at it anywhere, only the 'TFDC' logo in the top left hand corner. And no one's really going to know what that is, unless they have one of their own. Super. 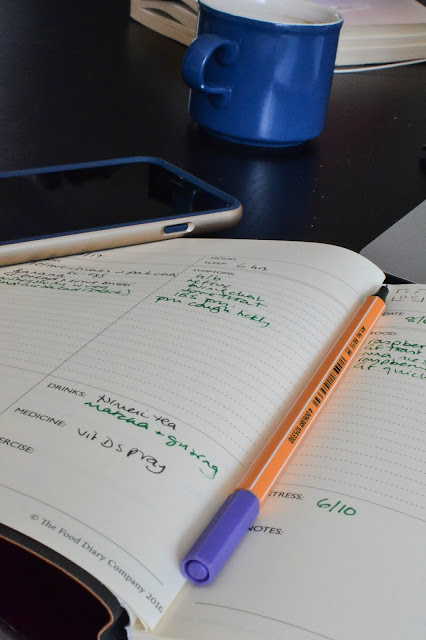 And you don't just track food and physical symptoms. You track mood, how many hours and quality of sleep, along with any medicines you've been taking. There's a section to track drinks too, which is something many of us forget when we do a food diary. I realised how important this section is when I found that black tea was also contributing to my reflux issues. You also jot down any exercise you've done, along with stress levels, which I found easier to record by giving a mark out of ten for, at the end of the day. It really helps you track everything that could be having an effect on your health.

I know what you're thinking: you can get apps for this.

I downloaded some food-tracking apps, before I had the diary. But the truth is, I'm just not an app person. I like to write things down. I like the pleasure of writing in whatever coloured pen I choose, in a book. There's something just quite satisfying about actually writing things down and being able to flick through the week, rather than selecting buttons on a list and tapping backwards and forwards through a digital calendar. For me, I could see the results much better by using the book, and it made me more likely to record my details, too. You also get to review your month, in special sections throughout the diary - getting you to actually think about what you've discovered, rather than blindly taking notes and never reviewing or looking back at what you've written.

The only thing I'd say is that some more choice in covers would be a great idea, rather than the straight brown cover, but I'm sure that will be in the works at some point.

So if you're told that it might be a good idea to keep a food diary, then have a look at this one. Yes, you can draw out the columns in a notebook and sketch out what you need to note down for a lot cheaper yourself. But this book is all done for you. It's created by someone that has actually had to use a food diary, so they know what needs to go in it. And just imagine all those hours you'll save not having to draw those columns and boxes with a ruler every day.

Functional, good looking and easy to use. I like it.

To find out more about the Food Diary do go along and visit the website.