Pan-Frying or The Tefal Optigrill: A Steak Experiment

This post contains affiliate links. This means that if you click through and decide to make a purchase, I may receive a small commission that helps me to keep the blog running. Thank you for your support. I was provided with the Optigrill for the purposes of the review.


Did you know that Tefal have a new gadget out? It's called the Optigrill and it claims to give 'superb grilling results from rare to well done'. So does it? 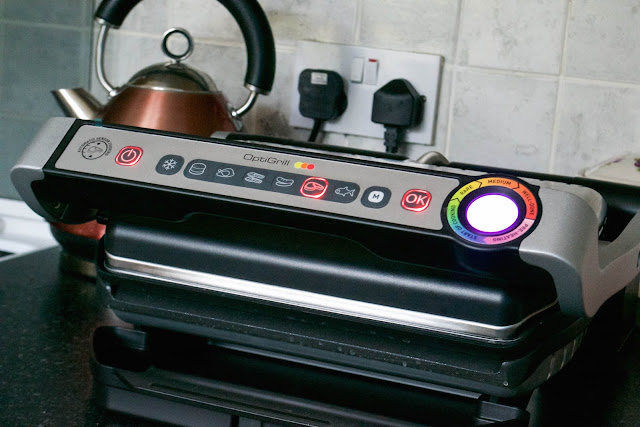 Well, I decided to do an experiment.

The first thing I noticed is that the plastic tray that collects all the cooking juices while cooking actually slots in and fits into the bottom of the grill. No knocking it accidentally and then realising steak juices are pouring all over your worktop and down your cupboards. That was a good thing.

The other thing I used to hate was the cleaning. But that's not a problem with this one, because you can quickly unclip the cooking plates and wash them in the dishwasher. They just clip back in nice and easily. The plastic tray goes in the dishwasher, too.

The controls, although to start with, might look a bit complicated, are not. You just press the 'on' button to light up the dashboard and then select what you're cooking. Then you press 'go' and the grill starts to preheat. A little beeping sound reminds you when to put the meat in and then you close the lid and it's cooking. No splattering, no mess - nice and easy.

All good so far.

But what about the actual cooking?

Well I was told that the Optigrill was especially good with steak, being able to cook it however you wanted - whether rare, medium or well done. The light changes colour to tell you when to take your meat out. Hmm. I wasn't sure I could trust a machine to tell me when my steak was done.

So I bought a couple of rib-eyes and put it to the test. 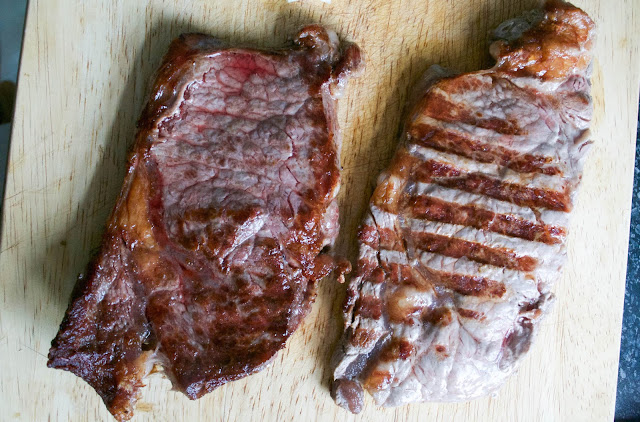 The first one, I griddled in a little coconut oil, and cooked it as I usually do, to medium. It was still a bit spongy in the middle, and pink and juicy but just cooked.

So. Onto the Optigrill. I cooked the steak as directed, and took it out when the flashing light beeped yellow-orange. I cut it in half and checked both steaks out.

Both steaks were cooked medium, still pink in the middle - pretty much the same.

Since then, I've cooked sausages, tuna steaks and bacon and it's worked really well. I did cook some frozen hash browns for the girls but they squashed down quite a bit and went a bit soggy so that didn't quite work as well, but overall I've seen really great results. I haven't tried it, but I guess you could also use the grill for making toasted sandwiches or cooking flat mushrooms. The pork chops I left in until 'well done' as directed, but they were a bit on the dry side, so it might be worth just checking once they get to the top end of 'medium'. Just cut into them to make sure they're cooked all the way through before eating.

So. The Tefal Optigrill. I like it. I like that it cooks meat well - and I like that you don't have to watch your steak cook - a little beep tells you when to hop along to the kitchen and take it out. No messing about, no splattering and no standing watching things cook.

Thumbs up from me.

Check out the Tefal Optigrill on Amazon (affiliate link):

I was provided with the Tefal Optigrill to use for this experiment.