We have a bus driver friend. And the other day he stopped me in the street. 'Have you seen the Venezuelan cafe in Reading? You've got to go, they have churros.' And if there's one way to get me to a restaurant, it's with the promise of churros. 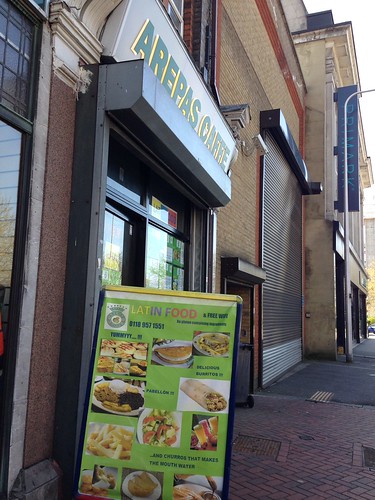 Arepas Caffe is at the end of Friar Street in Reading, round the corner from Primark and practically opposite Greyfriars church, across the traffic lights. They have a few tables and chairs - it's a small café - and the atmosphere is friendly and relaxed. On the wall are kids' drawings (that mine had to add to of course) and signs like 'Mi Casa es Tu Casa' (my house is your house) hung up on the walls. 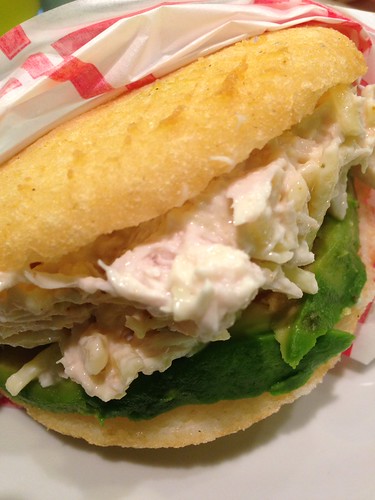 You can have a glance at the menu on the wall behind the counter, but it's easier just to ask what they have that day. We chose a couple of arepas (where the name of the café comes from) - and chose to have them fried and stuffed with our choice of fillings. Arepas are made from cornflour and are light and crisp - served hot and filled with chicken, cheese, avocado, mayonnaise and garlic sauce. It was our favourite. We also asked for one filled with meat, cheese, beans and slices of fried plantain. It was good too - but we're suckers for a garlicky treat and the 'Reina' arepa just took the prize. 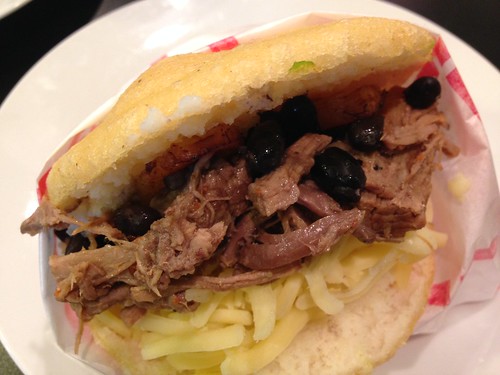 We also ate an empanada - filled with meat and cheese. I ordered this mostly out of curiosity to see how they differed from the empanadas I'd eaten in Argentina. And they differed quite a lot. Argentine empanadas are crisp and flaky, and made from pastry - whereas the Venezuelan ones are light and crisp - fluffy, even - and made from a similar corn-based dough to the arepas. 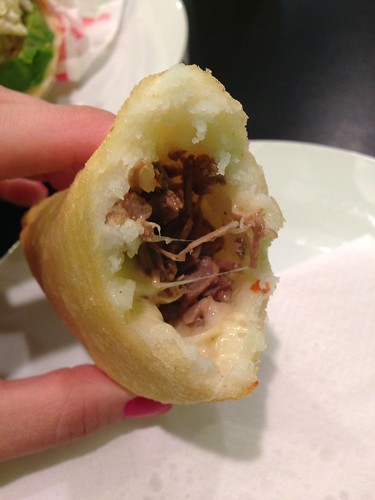 But we couldn't leave without eating churros. After all, that was what had lured us there in the beginning. They were light and long - not as dense as the churros we ate in Argentina - but crisp, hot and delicious. You can choose to have them dusted with cinnamon sugar or served with a pot of melted chocolate. We asked for both. Naturally. 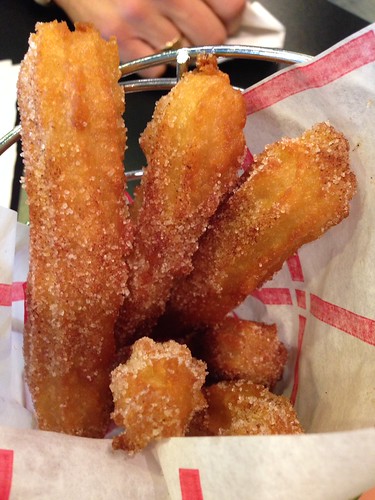 Prices are reasonable too - at £5 for each arrepa - but we didn't need to eat dinner that night, we were still full. That's value for money in my book.

It's so good to have proper, authentic Latin food in Reading's town centre, especially when at first glance the town looks like it's chocka with chain restaurants. People say that to me quite a lot when I say I live in Reading, as if the only choice is between Miller and Carter or Krispy Kreme. But the independent guys are all there if you look hard enough for them. And I promise, it's well worth it. Go on in and say hola.

Have you eaten at Arepas? What did you think?
Email Post
Labels: conventional south america venezuelan