Fish and Chips by the Sea... Philpott's in Hythe, Southampton

A small but friendly restaurant serving *really* great fish and chips by the sea...

I grew up near the sea, so I always have this thing about eating fish and chips on the seafront. Whenever I go to a beach, everyone knows we're in for some fish and chips at some point in the day. There's something about the steaming hot, flaky fish under crisp, dark batter - and eating it using a teeny wooden fork with the sea air tangling up your hair. I just love it. I'd spent the last fifteen years wistfully remembering my favourite fish and chips in an old-fashioned fish restaurant in Scarborough, served with mushy peas, a mug of tea and a slice of bread with butter.

But some of my seafront fish and chip meals haven't been up to the idyllic scene I've described above. Sometimes, I've had a reheated slab of processed, reformed fish, dumped into the fryer straight from the multipack in the freezer. Sometimes, the chips have been undercooked - pale, tough little things - that don't seem to satisfy a fish and chips craving.

But I've found a chip shop, right on the seafront, that serves up the best fish and chips I've had in a long time. It's called Philpott's in Hythe, near Southampton.

I remember Philpott's as Madgwick's when I was a teenager. Mr and Mrs Madgwick were real characters in the town and everyone knew them by name. You used to smell the chips cooking as you walked up the High Street. On Saturdays, I became a regular in there for my lunchtime treat of a cone of chips with my sister.

And I returned, twenty years later, to find that Madgwick's was now called Philpott's.

The chips are 'proper' chips - gnarly, crisp and really soft and tender on the inside. The fish is white and flaky, and the batter sturdy, crisp and dark - none of this brittle, flaky nonsense that just falls off if you look at it the wrong way. You get the choice to eat inside or outside - or you can just take it away and eat out of the paper on the Promenade, doing battle with the seagulls that'll eyeball you from the railings. 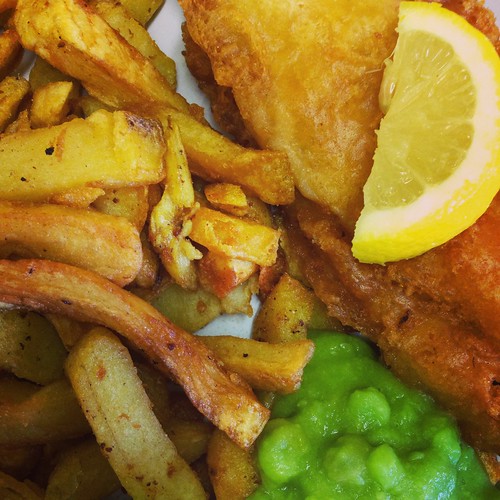 The last time we visited Philpott's, we ate in the little restaurant out the back. There are probably only four or five tables there but it's a welcome retreat when it's chilly outside. The portions are large, and you're served your tea in a china mug. It's welcoming, the staff are really friendly, and the fish and chips are completely perfect. There's nothing more I can say, other than if you find yourself in the area, do pay them a visit. We've been back a few times in the last few months and the quality has remained the same, each time we go. They're officially my new fish and chip place. Sorry Scarborough. We had some good times, but it's not you - it's me, etc etc etc....