Walkers Release New 'Pops' Crisps - I Try Them and Report Back

Walkers are on a roll, aren't they? They seek out flavours from around the UK to use in their crisps, then they have this competition going where you can win a million quid by inventing a crisp flavour, and then they bring out a new product. It's called 'Pops' and they sent me some to try. 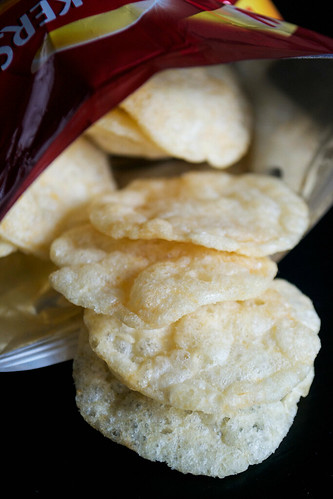 These crisps aren't fried - they're 'air-popped' - so they contain 50% less fat than their other crisps. And they come in Prawn Cocktail, Melted Cheese and Crispy Bacon, Sour Cream and Onion and Original (salted, to you and me) flavours.

So what did we think? I was sent the Melted Cheese and Crispy Bacon to try, and also the Original. I was a bit shocked in that I preferred the flavour of the Original crisps to the bacon ones - I just think the crispy (and they are very crispy indeed) texture worked better with the plain salted flavour. But then, my five-year old gave the bacon ones "2,999 thumbs up". So, yes, we liked them.