In my sister-in-law's house in Buenos Aires, there's a thick, black-covered book that dominates the bookshelf in her study. It was passed down by her grandmother, with yellowed scraps of paper sticking out of it - notes handwritten decades ago, in a swirly font. It's a cookbook by Doña Petrona. 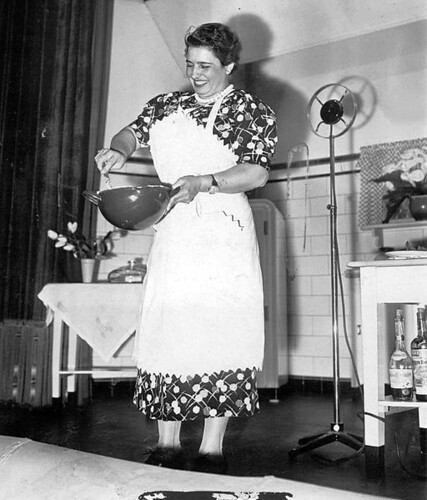 Doña Petrona was Argentina's first celebrity cook. She was born Petrona C. de Gandulfo in Santiago del Estero in 1896. One of her first jobs was to demonstrate gas ovens to prospective buyers, not only showing them how the ovens work, but also taking questions about what to cook and how to cook it.

It's often thought that this sparked her passion and enthusiasm for teaching, and her familiar, down to earth approach was a hit with readers. She published her recipe book El Libro de Doña Petrona in 1933 - not only a book which contained recipes but also tips on how to manage the home, entertain guests and cook economically. She was a hit - not only within Argentina, but its neighbouring countries too.

In the 1950s she appeared on television, which was followed in the 1960s with the show Buenas Tardes, Mucho Gusto - continuing to present cooking as unstuffy, simple and fun - with the help of her assistant Juanita.

I think that one of the secrets to Doña Petrona's success was that she gave the Argentine people exactly what they asked for. They asked for economical recipes and she gave it, working as well with the Argentine government to provide education about food and cooking. They wanted to see the act of creating dinner as a down to earth, enjoyable activity, and she wiped away any thoughts that it was stuffy or intimidating. She cooked really good, comforting food that used economical cuts of meat, seafood and seasonal vegetables - food that you'd be happy to sit down at home to after a long day, and also food that was worthy of a special occasion.

She also recognised the role of the working mother in her books - more and more women were going out of the home to work, and she gave them tips on how to manage both their working day and then how to keep the home running smoothly too.

Her cooking can't be described as 'healthy' - at least in the modern sense of the word. Flick through her book, and you'll see lots of flour, lard, butter and eggs being used - but then this was cooking that put meat on your bones. She lived to the ripe old age of 96, seeing a career that spanned more than six decades.

I often flick through my copy of El Gran Libro de Doña Petrona - mine is the 102nd edition - for inspiration and to get a feeling for what she was presenting to the Argentine people. She might not be a household name, at least in Europe - but for me, she really is an inspiration.

Had you ever heard of Doña Petrona? Have you tried any of her recipes?
Email Post
Labels: argentina