It's weird, I suppose. Up until now I've been avoiding pumpkin like the plague, after a pumpkin pie my Mum made me when I was about 8 years old put me off for life. And now, I can't get enough of it. The moment of conversion came last year when I developed a pumpkin pie recipe for Yahoo!, and topped it with a salty mixture of mixed nuts, cinnamon and brown sugar. It was a big pie, and I think I ate most of it by myself.

Since then, I find love pumpkin mashed, alongside roasted meats or fish - but most often I'll cut it into chunks, roast it, and toss it into a salad or some tacos. I find roasted pumpkin goes really well with lime and coriander too. But for this salad, I wanted something sweet, so decided to drizzle it with honey.

The sweet, honeyed pumpkin contrasts so well with the meaty, chewy chorizo and then it's all softened by the soft goat's cheese and finished off with curly, peppery rocket. I can't wait to eat it again. 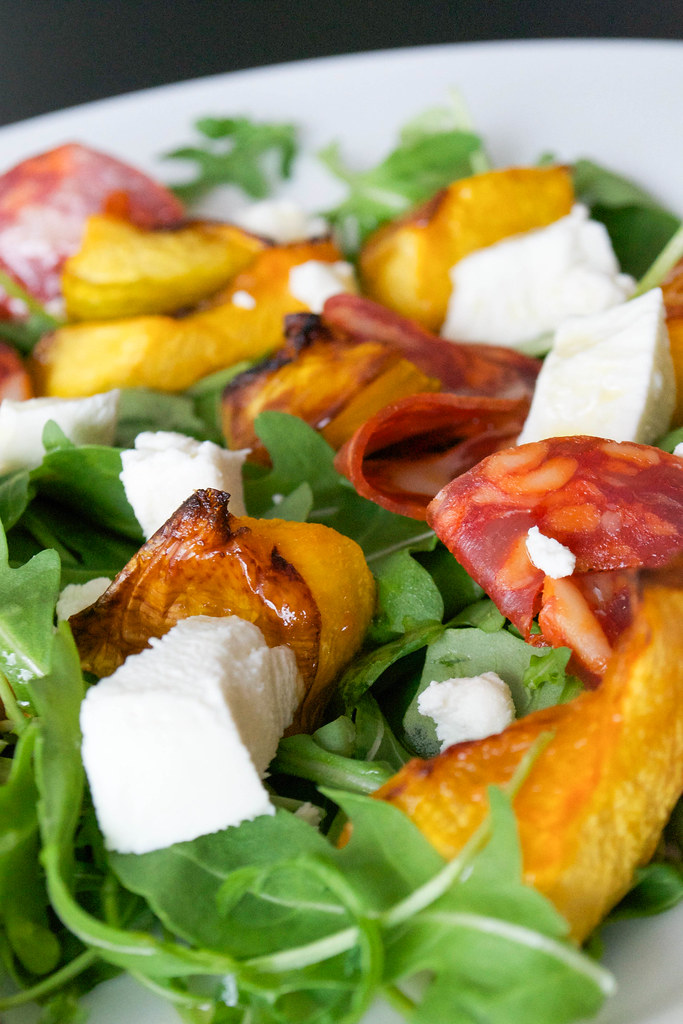 Method
Peel and de-seed the pumpkin and cut the flesh into chunky pieces, about 2cm square (roughly). Preheat the oven to 200ºC and slide a shallow baking tray into the oven with the 2 tsp duck fat, to melt.

After a minute or so, bring the tray back out and toss the pumpkin pieces in the fat until coated. Sprinkle over a pinch of salt and slide into the oven. Leave to roast for 25-30 minutes.

Once the pumpkin cubes are soft and just beginning to turn golden at the edges, remove from the oven and drizzle with the honey. Give it a stir so all the pieces are coated in the honey and then put back into the oven for 2-3 minutes, while you assemble the salad.

Arrange the rocket over two plates, with the chorizo slices. Whisk the ingredients for the dressing and taste - tweaking it to add more honey, salt, oil or vinegar as you prefer. Remove the pumpkin from the oven and arrange over the rocket leaves and crumble the goat's cheese over the top. Drizzle with the dressing and serve straight away.