It's All Good by Gwyneth Paltrow - A Review

I blogged about Gwyneth's first book before (Notes From My Kitchen Table) and decided that she didn't deserve all the aggro she got from the press about it. Yes, there were parts of the book that seemed indulgent (private cooking lessons with Jamie Oliver, languid lunches with movie star friends) but the recipes were good. And they weren't all macrobiotic, vegan recipes either. Roast chicken, lobster, pasta dishes. I loved it.

So I was quite keen to try out her second book, It's All Good. 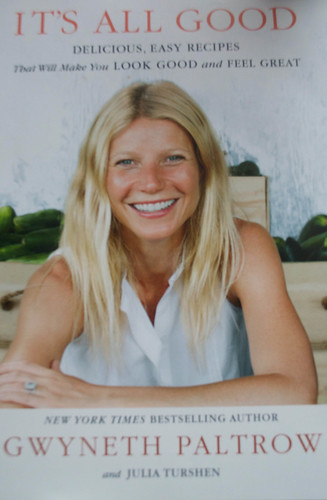 Yep, she's been criticised for this one, too. Some call the book 'out of touch' and 'creepy' and one person complained that for a family to eat like her would cost $300 per day. But yet again, I can't help but feel this is unjustified. I cooked quite a few of these recipes for myself and my family, to test out the cookbook, and I spent a good £30 less on my weekly shop, not more. The emphasis is on fresh fruit and vegetables, whole grains and dairy-free ingredients. Refined sugar is out - so you're using maple syrup and other natural sweeteners instead. There are some meat recipes - duck, chicken, beef - but you'll find yourself blending smoothies, chopping up salads and stir-frying quinoa, too.

The book begins with an admission that, after fainting at a family lunch, Gwyneth was tested and found she had a blood parasite, was severely run-down and her digestion was in trouble. Her doctor advised her to embark on an elimination diet and she found a dramatic improvement in her health. The book clearly states if a recipe is suitable for the elimination diet or is vegan, and it's easy to flick through and decide what you want to eat. The photographs are vivid and informal in nature and of course Gwyneth and her kids feature throughout.

I made the Japanese chicken meatballs for the children one night for dinner, using turkey mince instead, and they went down a treat. Quinoa with kale, topped with a runny fried egg has become my new favourite weekend breakfast. My four year old ate some. I - and my family - have never eaten so healthily, to be honest.

To be truthful, there are times in the book where you want to roll your eyes a bit. The book is co-written by a lady who worked as her private chef (nice for some), and she explains that once she found out she had food allergies, she had the whole family tested to see if they had any as well. But all the name-dropping that appeared in the first book has subsided here, and you can't argue that the recipes are tasty, simple to make and healthy.


The food I've cooked so far in It's All Good has all been tasty, simple to make and nutritious. I love it. I've also bookmarked lots of recipes I still want to make. If you're looking to incorporate healthier ingredients into your cooking, then I'd advise giving it a go. This one's a keeper.