I'm a bit of a history geek, and so as well as cooking modern dishes for the family, I like to have a go, every now and again, at preparing food from days gone by. I've already feasted on the First Class Menu from the Titanic, and next, inspired by an Egyptology-studying neighbour, I decided to have a go at trying to understand what Ancient Egyptians ate.

For anyone interested in history, and the Egyptians in particular, you might like to know about a bit of research that turned our modern views of the Egyptian diet on its head. In 2011, a study known as The Horus Study examined ancient Egyptian mummies' arteries and found that almost half (20 out of 44) showed signs of atherosclerosis - calcification of the arteries, which leads to heart disease. This showed that ancient Egyptians ate well - far from the typical 'bread and beans' diet that had been previously thought.

I'm no Egyptologist, but somehow I'd always thought of these people as serene, strict and super-healthy (you don't see many tomb paintings of obese Egyptians, do you?) and they'd need to be - building great big structures like the pyramids, temples and all the advances in medicine and science that they were responsible for. But, as it turns out, they were quite the party animals. As well as feasting on meats like chicken and lamb, they drank their own wine and one tomb painting shows a woman being sick during a banquet, presumably as a result of too much excess. This was the age of Cleopatra. Of the Pharoahs. Of Nefertiti. And I was about to get a taste, literally, for what was really going on at that time.

As no cookery books exist from that period, I relied on a book I'd been given by my neighbour, called Food Fit For Pharaohs by Michelle Berriedale-Johnson; a collection of recipes inspired by the ancient Egyptians. In it, I was reliably informed that the Egyptians ate flatbreads, dips, meat stews and bean dishes, all using local ingredients and those brought to them by the Romans. Tomb paintings show a number of ingredients being prepared in Egyptian kitchens too, which gives you a good idea.

So, for an appetiser, I made my own Baba Ghanoush: a coarse dip made from aubergines, a torn-up pitta, some cumin, garlic, lemon juice and parsley. We scooped it up with our pittas, just like the Egyptians would have done (there were no such thing as forks or spoons apparently). It was easy to make, grilling the aubergines until blackened and then peeling off the blistered skin. After a squeeze to remove excess water, these were blended with the other ingredients, resulting in a lemony, but slightly grainy dip. 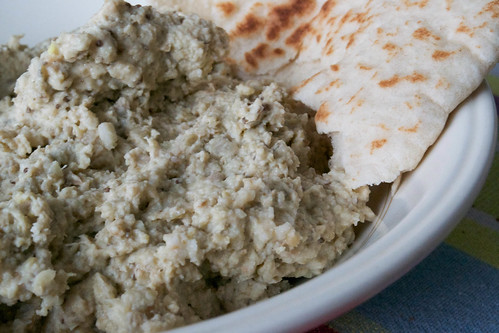 For our main course, we decided to go the way of the mummies who had been the subjects of the Horus study and go for diced lamb, cooked very slowly, in a mixture of olive oil (which they would definitely have had), turmeric, ginger and a splash of water. This was simmered away for a couple of hours and then right at the end, we added some artichokes. Now, I've never eaten artichokes with lamb, but they do go so well together. Artichoke remains have been found in excavations of 1st century Egyptian sites, so we know they were in use at that time. The stew was fragrant, stained yellow from the turmeric, and really good mopped up with some more pitta and boiled rice. It tasted better than we expected. According to Berriedale-Johnson, Egyptians would have used oxen for ploughing more than eating but apparently they did eat the odd bit of beef and feasted on fish, too, which were abundant in the Nile. 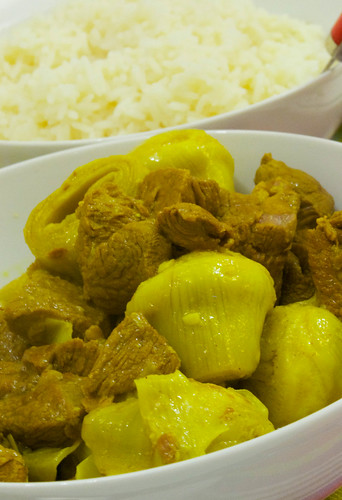 Veggies included, of course, aubergines, which were introduced later, but the Baba Ghanoush recipe is thought to have originated from Egypt. They also ate beans, such as fava beans, which were nutritious and provided energy, and we also know that the builders of the pyramids were paid in garlic and radishes, rather than in money.

I didn't get as far as pudding, but if you want to, you'd be pretty safe with dates, grapes, nuts and figs. It's thought that they drizzled some of these with honey and there was an inspiring recipe for fig ice cream, which I'll try soon. (I'm not sure that the Egyptians would have been making ice cream at all, but I guess the flavour ideas are all there.)

It was fun to eat food that was similar to what was eaten thousands of years ago. Ancient Egypt is always thought of along with curses, mystery and magic and I imagined the food to taste plainer and less well-flavoured than it actually was. The combination of lamb and artichokes was great, and I'll be working on more recipes that include them together soon. Now I just have to get on and make that ice cream.

What do you think? Would you like to try any recipes from history?