I don't normally keep packets of ready-cooked, microwaveable rice in the kitchen cupboard but they do have a place in modern life: they're convenient, quick, and because you're cooking just one or two portions you can avoid a lot of waste (I'm always guilty of cooking way too much rice which always ends up as fried rice the next day, whether I fancy it or not).

And then I learned that Tilda had released a 'limited edition' British Curry Rice, which has been developed by 2010 Masterchef winner Dhruv Baker. 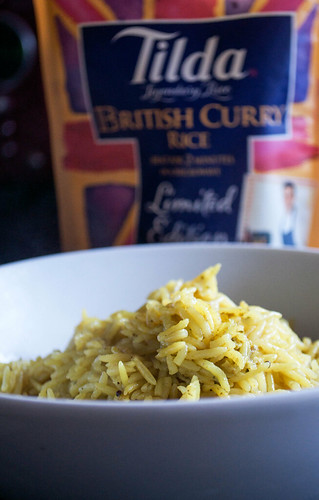 You just microwave the pouch for two minutes and you get fluffy, perfectly cooked rice that you can serve plain or as a side dish, alongside a meal. The flavours that come through in the rice include coriander, coconut and apricots, which give it a fruity touch. I especially loved the coconut flavour in the rice, and the flavours are actually more complex and on different levels, which I guess you'd expect from Dhruv Baker. There are also other spices in there, such as curry leaf, cinnamon and star anise.

I wanted to taste the rice as it is, to be able to give a fair review, and so didn't turn it into a new recipe. But the Tilda website does have some recipes created by Dhruv that you can try. I'd keep a packet of this in the cupboard, even just to make a change from plain Basmati rice with a curry or stir-fry it with a little curry paste and some chicken thighs, for example.

Tilda Limited Edition British Curry Rice will be available to buy until May 2013.

Have you tried it? What did you think of it and how would you use it?