I was contacted a little while ago and asked if I wanted to try out a range of products from Don Lear, otherwise known as The Bhaji Man. He wrote to me, telling me that he thought it was a shame that families relied a bit too much on takeaways these days instead of family cooking. So he created a range of spice packs that you just add to chicken, vegetables and stock, for example, to make your own, home-made takeaway favourites.

I set to work, and chose one of my favourite curries, the Tikka Masala to start with. The spice pack was easy enough to use, but does obviously rely on powdered spices, whereas if you're cooking a curry completely from scratch, you're more likely to use fresh garlic, chillies or ginger instead of the ground stuff, and it does make a difference to the flavour. However, the actual cooking was unfussy and quite simple. Each pack is labelled and the instructions are very clear - for example you fry the whole spices, then tip in the meat, then the ground spices and the stock and so on. You don't have to make any decisions, everything is set out for you. 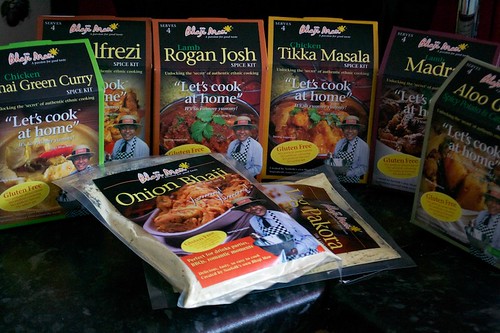 I did find the Tikka Masala a bit too strongly flavoured with cinnamon for my taste, to be perfectly honest, and it was spicier than any Tikka Masala I've had before (which I've usually regarded as a fairly mild dish). But then these are all personal preferences, and it is listed on his website as one of the top sellers.

I did decide to dish up a side of onion bhajis though, and I now know how The Bhaji Man got his name. You slice onions thinly (mine weren't really thin enough though, you need to slice them super thin), place them in a bowl with some salt and then sprinkle over the onion bhaji seasoning. Leave it for a few minutes and the juice comes out of the onion  and mingles with the seasoning, so the onion slices end up covered in a light batter.

You then pick up a tangle of the onion slices and fry them until golden. Everyone ate them all, very quickly. Perfect for a Saturday night in front of the telly with a beer or to nibble on alongside a curry. I'll definitely be making these again.

I still have some other spice packs to make, such as pakoras, Rojan Josh and even a Thai Green Curry and I'll keep you posted with how these turn out. I like the concept - the curries are a nifty idea, but the bhajis you definitely don't want to miss... we all thought they were the best we'd tasted.


Thank you to The Bhaji Man for sending over the spice packs for me to try.
Email Post
Labels: curry indian quick