You might not recognise Prudence Staite by name, but I can almost guarantee that you have seen some of her work. She was the creator of the huge Dita Von Cheese and Barack Obama portrait (both in cheese) and the huge (yes, you've guessed it) cheese sculpture of the Queen she created for the Jubilee this summer. She's also sculpted using other foods - chocolate, fruit and cupcakes... as in another portrait of the queen made up entirely of different flavoured cakes. Prudence even made a huge billboard entirely out of cheese. 'It was supposed to be edible,' she told us, 'but it was sitting in Covent Garden and health and safety didn't really want it to be eaten. So it was ground up after it had been exhibited and used for animal feed.'

There aren't many food artists in the UK, she went on to say. Apparently, it's bigger in America and some other parts of the world than it is here. And whether you agree with food art or you don't, you have to hand it to her. Where most art students select paint, brushes and charcoal as the tools of their trade, Prudence chose food when she took up studying at Winchester, and her work is now everywhere.

I wondered how long these impressive sculptures take to put together. 'The Dita Von Cheese took about 2 days,' she told me. 'Because we're working with food we don't have a lot of time to create things before they start to dry out or warm up.' She said that she had a separate chilled part of her studio to work in while she was making Dita, so the cheese could be kept at the right temperature.

We were also joined by Nigel White, Secretary of the British Cheese Board, who took us through a tasting of five different types of British cheese - a Cheddar, Stilton, Wensleydale with Cranberries and a British Brie, along with a new one - called Red Fox. It's similar to a Red Leicester but it has calcium crystals in. I totally loved it, and will look out for that one when I'm out shopping. 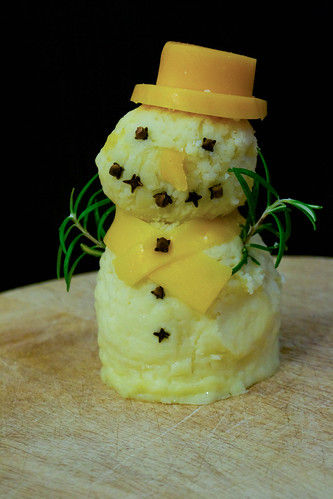 Next, Prudence cast a watchful eye over us as we donned blue food hygiene gloves and scrunched up grated Cheddar to make a snowman, complete with rosemary twig arms and clove buttons and eyes. And then we cut out shapes to make a Christmas tree out of different-sized stars. A twist of orange peel added some colour as tinsel and I gave mine a final sprinkling with silver food glitter. I was quite pleased with them, to be honest. The pictures you see here were taken at home after battling on the tube, railway and two buses in the 5pm rush - so they didn't do too badly. I think the snowman would actually make a great addition to a cheeseboard, and my children are really keen on making one themselves. They'd eat it, too. 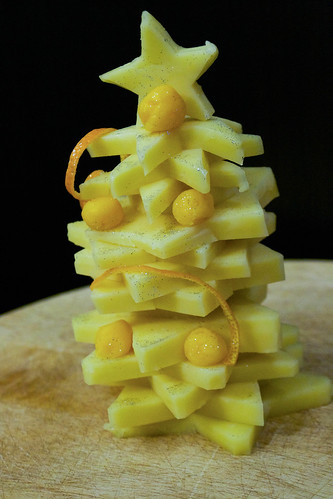 What I loved most about Prudence was her attitude - she cheerfully admits that there's nothing she won't think of making out of food, and was coming up with suggestions for different effects - like using different varieties of cheese for each layer of the tree. 'Stilton would just about hold it,' she said, when we considered whether other cheeses would be up to the job. We all agreed Brie was best avoided though as you'd end up with more of a Salvador Dali 'melting' effect after half an hour.

There were some rumblings on Twitter a few days before, that cheese sculpting was somehow a fairly crass and pointless activity and various people huffed that they'd rather eat it instead of 'sculpt' anything with it. Having spoken to Prudence and seen some of her work, I think it's all very well - it's a bit of fun too, and a small little cheesy Christmas tree or a cheese snowman is a cool thing to add as a backdrop to a festive cheeseboard. Especially if you're going to eat it, too.

With thanks to the British Cheese Board who invited me to the event.