Dining in the Dark at The Living Room, Oxford

As a blogger, you do get invited to some foodie events over the course of the year. Restaurant reviews, tastings, cooking with chefs. But this was different. For this event, I was blindfolded and given food. The aim was to try and guess the ingredients that were in the food, obviously without the aid of sight. 'Hmph', I sniffed - this would be EASY. But it honestly wasn't. 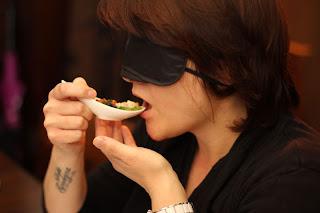 The Living Room have been running the event at their restaurants all around the country over the last few weeks and at each event, the blogger who identifies the most number of ingredients wins themselves a trophy.

We made a start, slipped on our blindfolds, and the serving began. The first thing I would say is that eating without seeing is really messy (napkins at the ready). The second thing I would say is that it's much more difficult than you think it's going to be. I got the walnut in the tart we were given but couldn't trace the Dolcelatte or the butternut squash that was in there. Caroline (from the blog All That I'm Eating) detected the truffle in the macaroni cheese, but I thought it was some mild blue cheese in there that was the secret ingredient. And although I got the coconut in the creme brulee, I thought it was raspberry in there too, not passionfruit. 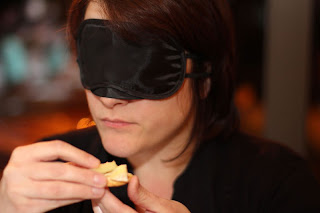 There were real highlights of the menu - one of them was the vegetarian Glamorgan sausage which we later discovered contained Caerphilly cheese and leeks as the main ingredients (I'd lost the plot by then and thought they contained some sort of ale, but they didn't).  They were delicious - and I'd probably make the trip specially to have them again. Also, the Moroccan lamb on giant couscous was another one we all agreed was tasty. A piece of seabass was served on some coconut and coriander rice, along with a piece of broccoli: the crispy skin on the sea bass cracked as I bit into it - something I'd probably not have noticed so much if I was eating with my eyes open.  It just goes to show how your other senses are exaggerated when you deprive yourself of one of them.


The experience was fun, valuable, and showed me just how important sight is when you're eating. I loved the dishes (especially the vegetarian sausages, the Moroccan lamb and the sea bass) but found the cocktails a bit too sweet, but then I'm not a cocktail person anyway. But if I'm being completely honest, the actual process of eating without seeing anything wasn't 100% enjoyable, and I think that's the whole point. As I walked out into the dark evening after the event I couldn't wait to see the pictures of what we'd been eating, which were emailed over later. You miss the vibrant colours of the food, indicators of what ingredients went in to making it: a frilly coriander leaf, a fleck of red chilli. You miss the grains on a piece of cheese, which tell you it's going to be crumbly, or the crisp, golden-grey skin of a pan-fried fillet of seabass. I think eating like this is something everyone should try once - you'll think differently about your food afterwards. I know I do.

I attended the event as a guest of The Living Room Oxford, on New Street near Oxford Castle - a 10-minute walk from the railway station. For more information visit the website or call 01865 260210.