Call me sad, but I always look forward to the Lakeland catalogue plopping onto the doormat and then flicking through and dreaming of all the kitchen gadgets I could have if I was a millionaire (as you do). But then, as I flicked through the most recent catalogue, I saw a machine I knew I had to have. It was the Lakeland pie maker.

The wording alongside the photo boasted of freshly made pies in 10 minutes; that the space it took up was similar to that of a sandwich toaster - and that you didn't need any pie dishes to go with it because the pie maker had its own special pie-shaped indents that moulded the pastry. I placed my order, and couldn't wait to get my hands on it. A couple of days later, it arrived.

I can't tell you the hassle I had when I first tried using this. There were times when I wanted to throw it out of the window. To begin with, I happily got on with making my own crumbly savoury shortcrust pastry; mixing, chilling and rolling, while the pie maker started heating up. This didn't take long - about 2 minutes I reckon. I lowered a circle of pastry into one of the indents and pushed gently with the 'pie pusher tool'. The pastry split. I tried again with another circle. It split again. I've never had any trouble with this pastry before, but for some reason it didn't like the pie maker at all. 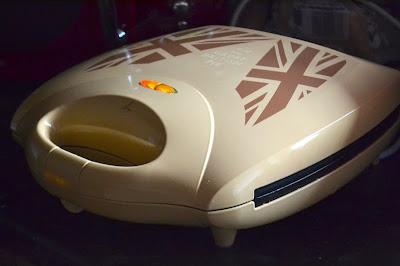 I then defrosted some shop-bought pastry I had in the freezer. It was puff pastry. And then I noticed in the instruction booklet that Lakeland do not recommend using puff pastry for the base, only for the top. I wondered why, so I made it with puff pastry anyway to see what would happen. The pastry didn't split at all when I shaped the base but I now found out that it's not recommended because it doesn't cook through properly.

But making puff pastry pies with this machine is not impossible. If you use the maker to shape and fill your pies and then seal the lid on, you can take them out after 10 minutes and then slide them into a hot oven for another 15 minutes or so. Just make sure you pierce the top, so they don't explode. This will give you perfectly-shaped puff pastry pies cooked all the way through.

I've tried quite a few pastry recipes with the pie maker and haven't found one yet that doesn't result in splitting when you try and mould the pie. When you make a crumbly pastry to line a regular pie dish, remember that the pie dish isn't usually searing hot and so you can patch up any bits that crack as you go. And because this IS searing hot, the pastry starts to cook even before you've put your fillings in. I'm using shop-bought shortcrust with mine now, but I'll report back on this post if I figure out a way around it. 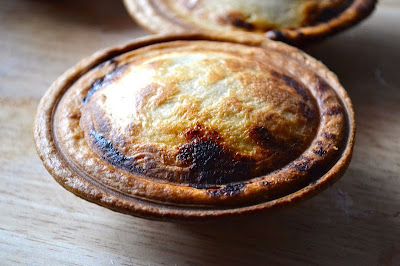 I've had the pie maker for a few weeks now, and I have to say it's worth persevering with. At £29.99, it's not badly priced for something that you will use a lot, throughout the year. I bought mine because I always end up with the odd serving of stew or curry that no one wants and so I decided to put it into a pie and freeze it for lunches or quick dinners. It's great for this, and I reckon it will save us a lot of food waste.

I'm a bit peeved that I didn't know beforehand that crumbly pastry wouldn't work in it, or puff pastry (at least not without the oven's help). But I am glad I bought it - once you get the hang of it it'll help you produce pies quickly and easily - and it takes up just a bit more space than a sandwich toaster.


Lakeland Pie Maker Disadvantages:
Do you have one of these pie makers? What did you think of it?
Email Post
Labels: product reviews