Review of Notes from my Kitchen Table by Gwyneth Paltrow

I'm a bit late to the party with Gwyneth Paltrow's cookbook. It was released in 2011 and there were questions in the press about why an Oscar-winning movie star would publish a cook book, along with suspicions that she was in it just for the money, using her fame as a vehicle to sell what was essentially an average (and some said, indulging) cookbook. 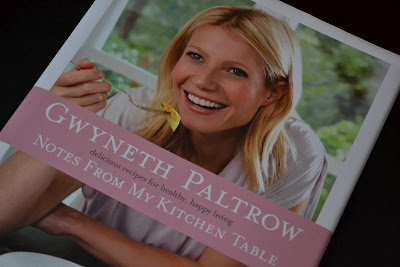 But Gwyneth wasn't the first movie star to release a cookbook: Sophia Loren, Frank Sinatra and Eva Longoria (among many others) have all released them. And, although I admit that I did roll my eyes a little when the book was first announced, this is not a cookbook you want to be passing off before reading it.

I got hold of my copy earlier this year (in a charity bookshop), and I've been cooking some of the recipes from it. It focuses on healthy but hearty meals, with some Mediterranean influences (olive oil, roasted tomatoes, red peppers, anchovies and beans are all frequently mentioned) and most of them are quick mid-week meals that you'd only need to shop for a few extra bits to knock together.


Some of the dishes are cheap - like artichoke and pine nut pesto (page 137) but others are expensive. Lobster is the  main ingredient in five different recipes. The other problem is that some of the ingredients can't be bought at the corner shop or even some larger supermarkets, like Bomba rice, Bragg Liquid Aminos, white, barley and red miso and vegenaise - however although you could shop for some of these online, to be fair, she does suggest alternatives throughout the book if you can't find them.

When I started cooking from the book, I found the dialogue friendly and straightforward - many of the recipes come with anecdotes of showbiz life: Leonardo di Caprio lecturing her on the way animals are reared for food, personal cooking lessons with Jamie Oliver and a silent retreat at a Japanese monastery ("don't ask, it's a long story", she says). All this, and the foreword is written by Mario Batali.


But then there are all the homely bits, her dad's pancakes, the green rice her children love to eat and her mother's famous cookies. The recipes were easy to follow and clear, and they all worked.

I was really surprised at this book and was ready to pass it off as purely a money-making exercise. That'll teach me for being such a cynic. It's healthy, light, modern food that you look at and want to eat. Good on her.

Notes from my Kitchen Table is published by Boxtree.
Have you read the book? What did you think?
Email Post
Labels: book reviews healthy comfort food