It was no big surprise to me when Gok Wan released a cookbook and announced his TV cookery series. It seemed to me that on almost every show he was on as a guest he ended up talking not so much about fashion, but about food. He talked about memories of the Chinese takeaway dishes his Dad used to rustle up, and he's obviously learned a lot of these dishes along the way. Judging by comments on Twitter, Gok's been received fairly warmly by foodies, although blogger Mr Noodles has criticised him for declaring fish sauce an essential Chinese ingredient (when it really isn't that common in Chinese cooking after all).

So anyway, on to the book. 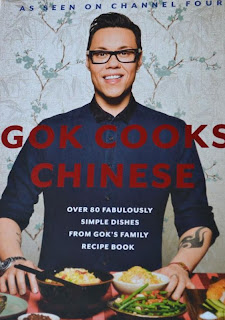 ﻿﻿﻿﻿﻿﻿In many respects, the layout of the book has a Chinese takeaway theme. The contents page reads like a takeaway menu, complete with swirling red dragons and the recipes numbered and listed in columns. The good thing about it is that almost every recipe has a photograph of it alongside, which, whether you admit it or not, helps massively when you're deciding what to cook. There are just a handful that don't have accompanying photos, which makes me wonder if it would have been worth them having a few less shots of Gok strolling down the street/hiding behind a steamer lid/Chinese lanterns to get shots of those recipes in.


The recipes themselves are very clear and easy to follow. I did find with the Garlic Chicken recipe that carrots are pictured in the dish but don't appear anywhere in the ingredients - but that's minor - add carrots if you make that, it's very good. There are a mixture of both quick takeaway classics and dishes you can take your time over, such as long, slow aromatic roasts. My children love the Garlic Chicken, and we make that about once a month at least, and the Chow Mein (I used chicken instead of prawns) tastes better than our local takeaway (and it's much cheaper obviously, too).


I'd already made Ching He Huang's aromatic roasted duck and found that Gok's didn't have quite as strong a flavour, and the same went for the honey-glazed Char Sui pork (again, sorry Gok, I prefer Ching's Char Sui). But there are still lots of recipes I haven't tried yet - Singapore Noodles, Braised Beef Short Rib and Char Sui Pork Buns are ones I want to try out soon, and I'll keep you posted as I do.

Would I recommend this book? If you like Gok, and if you want to know more about his background and his love for Chinese cooking then you will absolutely love it. And if you're just interested in cooking really good Chinese food, you'll find it useful - there are some really great tasting recipes in there and they are simple to make, and need just a few ingredients. Ironically, I've yet to make a dish from the book that asks me to slosh in some fish sauce, though...

Have you cooked from the book? What did you think of it, or the television series? Let me know in the comments box below...