As I stepped out of my cab into the lashing rain at London's Earl's Court on Sunday, I strode to the main entrance with purpose. All because I knew that, inside those walls, there was going to be cake. Lots of cake.

I was thrilled when I was invited to the first ever Cake and Bake Show which took place at the weekend. I knew there would be stands and demonstrations, but I was surprised at how many. The show was laid out so well - there were the usual stands selling sugarcraft materials, cupcake wrappers and various sugarpastes, a classroom area where you could learn from some of the masters of cake decorating and gain baking tips - and demonstration kitchens where you could watch celebrities of the baking world do their thing.


I arrived at the show at around 2.30pm on the Sunday, which means I missed Eric Lanlard, so sorry for the lack of Lanlard pics. But I did get there just in time to see the end of Mary Berry's demo - well, I didn't get to see much of her, amid the jostling crowds and the security heavies who were moving everyone away from the side of the kitchen. I got a few blurry shots, not good enough to publish here but I did get a pic of the cake she made... 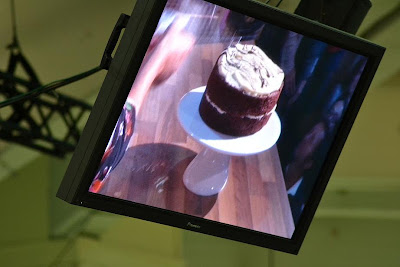 Mary attracted huge crowds for her demo, and was joined at the end by Paul Hollywood who 'helped' her decorate her chocolate cake. "Oh, he likes to squirt over everything", she remarked as he scribbled some icing over her cake. "I'm glad I didn't do that," she added, afterwards.

Once Mary Berry (and her security people) had dispersed, I had a mooch around. The wedding cake gallery was completely beautiful, with 5 or 6 gorgeous wedding cakes all lined up for inspection.
﻿
﻿﻿
﻿
﻿﻿

And looking at this Teddy Bear cake by Debbie Brown, it was hard to believe that it was actually a cake and not a porcelain ornament. Amazing stuff. 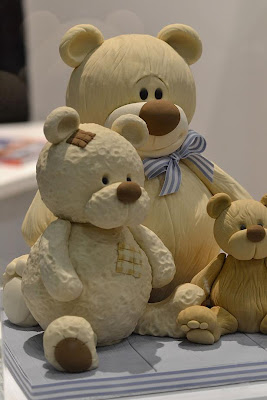 There was a frantic sugarpaste competition going on near the classroom area of the show, demos taking place absolutely everywhere and free samples being handed out, along with a 1940s-style swing group singing near the café.

My next stop was Edd Kimber's demonstration at 3pm. Edd won the Great British Bake Off in 2010 and showed us how to make portuguese style tarts and chocolate truffles. He talked about Paul Hollywood ("he's not horrible, he's a softy"), Mary Berry ("she uses Bourneville chocolate for baking at home"), baking beans ("at home I use rice, because it fills in all the gaps better than ceramic beans﻿"), and caramel ("it needs a bit of salt. Even if you're not making 'salted caramel' always add a pinch of sea salt because otherwise it's too sweet.").

When taking questions from the audience Edd was asked how much his life had changed after GBBO. "My feet haven't touched the ground since the series ended. I get to do something I love as a job and that's great." He talked about how quick it all happened: "two days after I won, I quit my job and 2 months afterwards I got my first book deal."

Edd also talked a bit about the GBBO innuendos, and said that recently he's noticed a few that don't seem quite natural and accidental but that it's all fun, and also revealed that in the final of his series he cut himself quite badly on the wrist. He said the cameras didn't show it but he was standing up in the kitchen, arm raised, while paramedics came to check him out, and was still kneading with the other hand. "Because it was the final!".

I loved this show, and I think it was much better organised than some of the other food shows I've been to. There were huge signs near the ceiling so you could easily find the classrooms or kitchens and quickly get to where you needed to be. There were also signs showing you the timetable of events so you could plan your day and everyone was really helpful and friendly. Unlike the Good Food Show too, once you pay for your entry ticket, everything else was free in the way of classes and demos. I paid extra to see James Martin on stage in Birmingham, but you could rock on up when it suited you to watch the demos at Cake and Bake.

I noticed one criticism on Twitter that the show was more cake than bake, and it's true that sugarcraft and decorating were the main subjects of many of the demos and stalls. But I did think it was perhaps a little unfair - there was the Real Bread Debate, and demos of kitchen equipment that were as much to do with making and baking the cakes than just decorating them. There were stalls dedicated to various bread flours too, but not much in the way of bakeware. I'd like to have also seen some more refreshments, perhaps an artisan pie stall selling hot pies and pasties and more places for thirsty cake lovers to buy a cup of tea.

Another great plus for me is that it was held in exactly the right venue - Earl's Court tube station is directly opposite the event. I loved it and I'd go again next year for sure. I'd just make sure I had the whole day (or both days) free next time, to really make the most of it. I came home exhausted, but full of ideas for future cakes... watch this space!

Did you go to the Cake and Bake Show? What did you think of it?
Email Post
Labels: baking food festivals sweet sweet cravings