Well I've completed my second gluten-free day and I have to say, it's much easier than I thought. I've continued to eat all the special 'gluten-free' alternatives to bread and crackers, etc - and so far it's going really well.

I'm not sure whether it's psychological or just the fact that I'm eating less in the way of biscuits and other shop-bought things (actually nil biscuits) but I think I do feel lighter and kind of healthier. I never thought I had a sensitivity to gluten but maybe I do.

One of the main things I'm finding, as I mentioned, is that I have to be careful with ready-bought foods and reading all the labels. I found out today that Walkers crisps can't be certified gluten-free as they are made in a factory which processes wheat. (Boo). And the weirdest thing I've found is that although potatoes are fine to eat on a gluten-free diet, McCain's Crispy Oven Fries are not. They contain WHEAT (??). Sausages also contain breadcrumbs and are unlikely to be gluten-free so they're out, too, along with battered and breadcrumbed fish. But I find that if you stick to basic, pure foods that aren't made of wheat flour or bread you're alright.

Anyway, I'm getting along just fine. There's no video clip for today because it's the summer holidays and I can't seem to get a minute to myself to film a 3-minute clip either without one of them shouting for me, or with the plinky Peppa Pig tune in the background, so I'm typing! I will, however show you what my day's food consisted of, and very nice it was too.

Here's what I ate for day two: 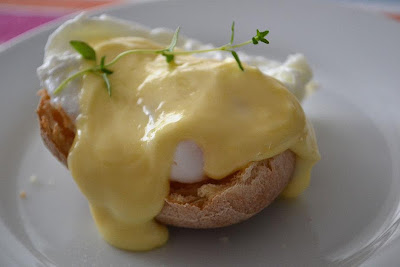 Eggs Benedict: The cookbook I received for the campaign suggested this, and I was thrilled. Quite a rich, indulgent breakfast but it was good - just split a gluten-free ciabatta in half, toast it and top with a poached egg and a spoonful of Hollandaise sauce. 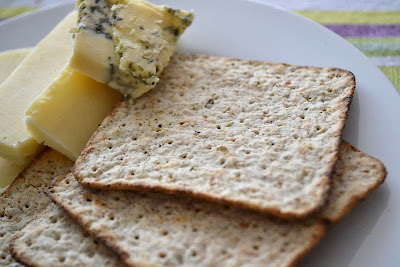 Cheese and Crackers: Just what I needed. Unprocessed cheese is fine on a gluten-free diet, you just have to watch if it's processed or has added starch in it. I sliced some crumbly cheddar and some Stilton and ate it with gluten-free crackers, which instead of being made from wheat flour, are made from things like rice flour and maize starch. They were garlic and herb flavour, and completely delicious and crisp. 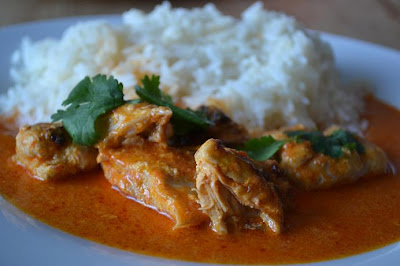 Chicken Tikka Masala: This is one of my favourite curries, and as it's made from scratch with fresh vegetables, chicken, cream and spices, it was completely gluten-free. I was a bit misguided before I started the campaign, because I always thought that rice contained gluten but it doesn't. Hurray! If you're eating gluten-free, you need to watch out for ready-made sauces bought in a jar as sometimes they are thickened with starch - just check the label.

Snacks: I've steered clear of crisps (now they're not allowed *pouts*) and snacked on a couple more crackers throughout the day and had fruit and yoghurt.

I've had some really positive and supportive comments, here and on Twitter, after yesterday's post so thank you for that, and I'm still open to any thoughts or recipe suggestions if you have any you'd like to share. As I said, I do feel better in myself - and it just goes to show that if you do switch to a gluten-free diet, it doesn't take very long at all to see some results.


Are you on a gluten-free diet? Any tips you could share?