Review of The Icecreamists Book

The Covent Garden Icecreamists store has had its fair share of publicity over the last few years, with health inspectors being called in to seize batches of breast milk ice cream and Lady Gaga threatening to sue them over the name of it ('Baby Googoo'), which was also served up by ladies with long blonde hair, pointy silver bras and masks. They offered to change the name, but the pop star still wasn't happy. "Not even with Ladyboy Gaga," they cheekily state on their blog. The Icecreamists also opened their gay pop-up on Maiden Lane (for over 18's only) and also ran a saucy ad showing a smiling Prince Harry sticking his finger through the middle of a doughnut. It's not surprising, then, that before he was playing naughty with ice cream, Matt O' Connor was the man behind the campaign group Fathers 4 Justice. The group that organised the Batman and Robin stunt on Buckingham Palace in 2009, and the 'Spiderman' climbing up on the London Eye in 2004. 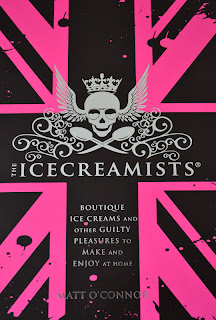 And what's interesting is that many of these escapades inspired great ice creams which are detailed in the book. The Savoy Chill, he says, was inspired by an interrogation by a female officer wearing fishnet tights and a cocktail dress at London's Savoy, as he sipped on Earl Grey tea. The idea for the Mint Condition ice cream came after the police force suspected that he would scale Ben Nevis wearing St George's armour. Something, he states, he was in no condition to do at the time. And this is why this book - far from being just a 'recipe' book - is one of the most entertaining books I've read in a while.

I decided to roll up my sleeves and make a few ice creams from the book. The Peanut Butter ice cream was brilliant - a sweeter take on peanut butter on toast, served on toasted brioche with peanuts scattered over. The recipe states to use unsalted peanuts, but I reckon these would work well too, if you like the salty-sweet combination. And I used American-style, runny peanut butter, which made it easier to blend into the ice cream mixture. It was gorgeous and one of our favourites.

﻿The Mint Condition ice cream is a basic mixture, with chopped and melted After Eight Mints stirred in. The recipe stated though to melt the mints, and then later to chop them (they were already melted) - so I just melted half and chopped half. It was so refreshing, and made me think differently about ice cream. With the right ingredients it's so simple to play around with flavours.

But our favourite ice cream was Espresso Yourself: a rich, creamy coffee ice cream, used in their Godfather cocktail, also in the book. A couple of scoops (if you can stop there) is perfect for finishing off a meal, instead of a cup of the real stuff. I squeezed some toffee sauce all over mine and it's one of the best desserts I've had.


The photography in the book is colourful, sharp and moody - the design is full of Union Jacks, bright colours, punk-style lettering and that scratchy, swirly writing that lets you know that it's also a bit naughty. There are saucy anecdotes as well as recipes for ice creams, cocktails, sorbetttos and lollies. And as well as breaking boundaries with flavour combinations and styles (the breast milk ice cream recipe is also in the book, should you have any, er, handy...), the book also breaks down the myth that making ice cream is difficult. The recipes don't have long, complicated lists of ingredients and once you master how to make the basic mixture, you realise how easy it is to experiment with flavours by adding a dollop of peanut butter or some melted chocolates. I loved this book, and I'll be using it a lot. I mean, come on, how could I not love a book with a whole chapter dedicated to 'Guilty Pleasures'?